Fire explosion in a drug factory in Cumilla, 7 injured 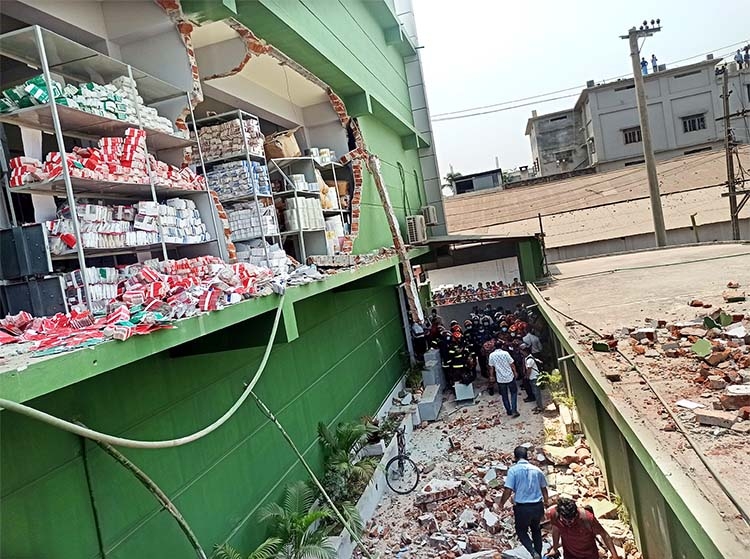 Collapsed portion of the factory of Bengal Drugs and Chemical Works (Pharmaceutical) Ltd due to a fire explosion. -AA
A horrific fire explosion has taken place in a pharmaceutical factory named 'Bengal Drugs and Chemical Works (Pharmaceutical) Ltd' at Rani Bazar area of Cumilla city's BSCIC Industrial City. At least seven workers of the company were injured in the incident. Six seriously injured workers were first admitted to Cumilla Sadar Hospital and later three of them were admitted to Cumilla Medical College Hospital.
The incident took place at around 10am on Wednesday at the C-24 block in BSCIC industrial city. The district administration has formed a four-member investigation committee to look into the incident.According to the injured, 30 to 35 employees were working in the factory on Wednesday.
Seven workers were injured when the second floor wall and other parts collapsed. Among them, Sharmin Akhter (16), Zulekha Begum (38), Shamima Begum (40), Al Amin (25), Fahmida Akhter (20) and Fatema Begum (35) were rescued and taken to Cumilla General Hospital. Later, Zulekha, Shamima and Al Amin were admitted to Cumilla Medical College Hospital with serious injuries. Sumon Chandra Datta, plant manager of the company said that, medicines are manufactured in this company. There are 35 people working in the factory.
He added that, it was initially thought that the explosion may have been caused by an AC explosion or a chemical and gas cylinder. However, Fire Service and Defense Cumilla, Office Assistant Director Jasim Uddin said, "Although the factory authorities initially claiming that it was an explosion from the AC, it is being investigated whether the explosion was due to AC or some other reasons."
Cumilla Deputy Commissioner Kamrul Hasan told the reporters after inspecting the spot that, an investigation committee headed by Additional District Magistrate, BSCIC authorities, fire service and police has been formed to look into the fire explosion. The committee has been asked to report within the next 7 working days.
---Jahirul Haque Rasel in Cumilla