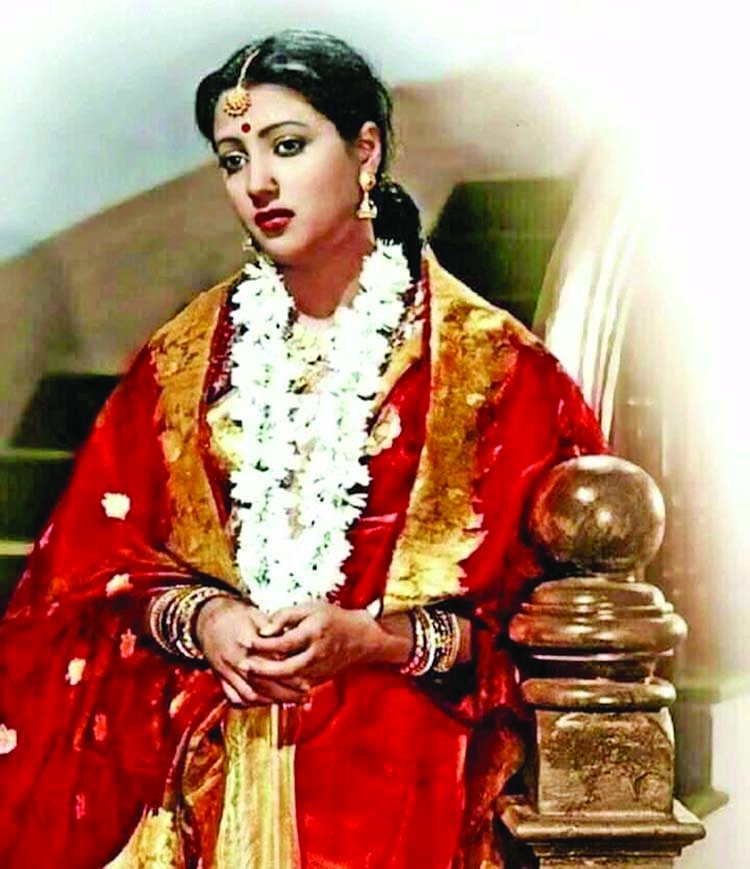 In life, as in death, Suchitra Sen remains an enigma. The dusky, elegant beauty with an enchanting smile, marched into the celluloid like Colossus. Her vibrant, romantic appearance used to send the audience into a tizzy. Her unmatchable performances stole many a million hearts. That's how you describe Suchitra Sen, the graceful chapter of India's tinsel town. On her 90th birth anniversary, we take a look at the Mahanayika's stardom to reclusive journey.
Born as Roma Dasgupta, on April 6, 1931, in Pabna district the enigmatic beauty did her schooling at a local high school but because of the Partition in 1947, the Dasgupta family had to migrate to West Bengal. That same year, Suchitra stepped into an early marriage with Dibanath Sen, son of then-famous industrialist Adinath Sen and it all started from that period.
Dibanath was surprised to find out his wife's terrific acting talent early in their marriage life and encouraged Suchitra Sen to start a career for herself. He brought in an iconic filmmaker Bimal Roy, whose late sister was incidentally Adinath Sen's first wife. It was Bimal Roy who introduced her to another noted director of that time Sukumar Dasgupta.
After a formal screen test, Sukumar launched the aspiring actress in his film 'Saat Nombor Koyedi'. Not many people know one of Sukumar Dasgupta's assistants gave the young actress her iconic screen name 'Suchitra' and rest his history. In 1953 Suchitra Sen signed several films including 'Kajori', 'Sharey Chuattar' and 'Bhagawan Sri Sri Krishna Chaitanya'. Suchitra and Dibanath's only child Moon Moon Sen was born next year. However, the ambitious actress managed to juggle her motherhood with film career like a pro.
Many believe the turning point in her budding career was the cult classic 'Sharey Chuattar' as it became a super hit. This comedy caper directed by Nirmal Dey had legendary actors like Tulsi Chakraborty, Molina Devi, Bhanu Bandopadhyay, Jahar Roy and many more. The most significant point is Uttam Kumar, for whom it was debut film, was successfully paired with Suchitra to pave the way for a golden era.
From this point, literally, there was no looking back for both of them.For the next two decades or so, the celebrated pair ruled Bengali cinema. Incidentally, among the 60 odd films in which Suchitra Sen appeared, 30 films saw Uttam Kumar as the male lead. In fact, Uttam soon emerged as the heartthrob of Bengal along with the romantic and melodramatic Suchitra Sen.
Their landmark films include 'Saptapadi', 'Shilpi', 'Har Mana Har',' Indrani', 'Chaawa Paawa', 'Shapmochan' and 'Suryatoran' among many others. These cult classics used to enjoy jam-packed cinema halls on a regular basis. During the 50's and 60s, serpentine queues for tickets in advance for Uttam-Suchitra films were a common phenomenon. The unmatchable fandom of this iconic pair set a benchmark in the history of Bengali cinema and it remains unchallenged till today.
Suchitra Sen achieved her first international success in 1963 when she received the Best Actress award for 'Saptapadi' at the Moscow International Film Festival. She became the first Indian actress to have this honour! Another of her record-setting movie was 'Uttar Falguni' where she played a double role of courtesan Pannabai and her barrister daughter Suparna. She was flooded with congratulations and rave reviews for essaying out the stereotypical mother ready to go to any extent to offer her offspring a dignified life.
One more landmark film 'Saat Paake Bandha' guided Suchitra Sen into the limelight once again. Here she was cast opposite another acting legend Soumitra Chatterjee. The matinee idol reflected the agonies of a young wife torn between her idealist husband and her rich, dominating mother so aptly that the audience was left in awe. The climax of the film where the wife tears off her husband's vest in a moment of glory remains attached with the minds of Suchitra Sen's fans even today. This one too won another award at the Moscow Film Festival.
The legendary actress stepped into Bollywood under the guidance of Bimal Roy who decided to cast her in his blockbuster 'Devdas' and she excelled in her role sharing the screen with the then superstars Dilip Kumar and Vaijyanthimala. Her grace and immaculate style gave her the opportunity to shine in 'Bombai Ka Baboo' opposite the evergreen Dev Anand. However, Suchitra Sen's most famous Bollywood film is Gulzaar's 'Aandhi' which followed a woman politician's dilemma between her political and personal life. It created a storm throughout the nation as the storyline had an uncanny resemblance with the life and career of Indira Gandhi.
She eventually received a nomination for Best Actress for her sensitive performance in 'Aandhi'. Sadly, she missed the opportunity to work with the Titans of contemporary Bengali cinema at that time like Satyajit Ray, Ritwik Ghatak and Mrinal Sen. Though Ray once tried to cast her but things didn't work out. In 1972, Suchitra Sen was conferred with the prestigious Padmashree award.
Although Dibanath Sen had taken all the initiative to launch his wife's film career once, yet her increasing popularity and stardom saw them drift apart. It was November 1969 when the news came - Dibanath has died in a car accident in the US. After this disaster, Suchitra Sen surprising everyone went into self-imposed oblivion as she detached herself entirely from all the public appearances and contacts.
Consequently, the film fraternity and media started to compare her with Greta Garbo, the mysterious Hollywood star. To stick with her obscurity, in 2005 she even refused the prestigious Dadasaheb Phalke Award. Then it was January 17, 2014 - the day when Suchitra Sen walked into the sunset. Till date, the elusive mystifying queen of Bengali cinema lives on in millions of her fans' hearts.