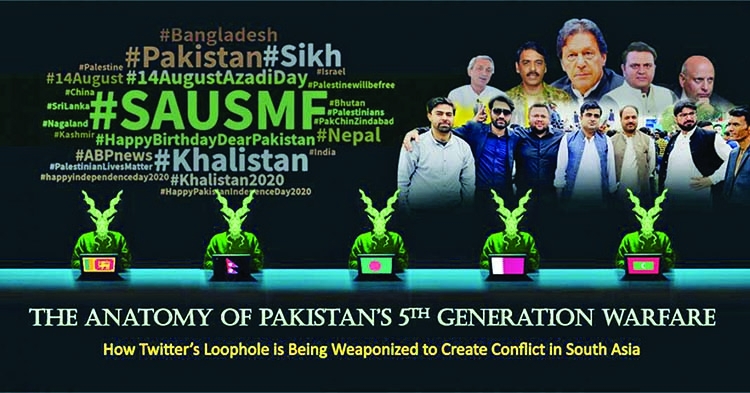 The social media gambits by the Pakistan government to create conflicts in South Asia have been revealed by certain news agencies. Disseminating false information has become one of the major instruments in the hands of the Pakistan authorities to carry out such stratagems.Fake news has always remained a preferred tool for statecraft, and has become even more lethal in the age of social media. One such nation in South Asia is using it to cause differences between other South Asian nations.
Spreading disinformation has become an easy task due to Twitter's facility / loophole which allows the users to change their profile (name and username). This tool has been deployed by various Pakistani social media accounts in propagating Anti-India fake narratives. Easter bombings of Sri Lanka, Islamophobia in India, Galwan valley clash, Farmers' Protest of India are few of the many incidents where Pakistan has falsely accused India as the architect of these occurrences.
By July 2020, the Pakistani establishment decided to create a full-scale fake news industry by way of South Asian United Social Media Front (SAUSMF). SAUSMF website was hosted by Pak Cabinet Minister and close aide of Prime Minister Imran Khan - Jahangir Tareen on his server.The main members of this nexus included Aftab Afridi, Awas Javed Satti, Asim Khan who share direct links with Pak army, team Imran Khan and Pak businessman Jahangir Khan Tareen, the man who ensured Imran Khan's electoral victory.
Other than the Pakistani members, all other so-called members from South Asian countries are fake profiles, run by Pakistani members, most of which are associated with Pak PM Imran Khan's party Pakistan Tehreek-E-Insaf (PTI). Among the entities amplifying South Asian United Social Media Front (SAUSMF) propaganda is also the state broadcaster Radio Pakistan.