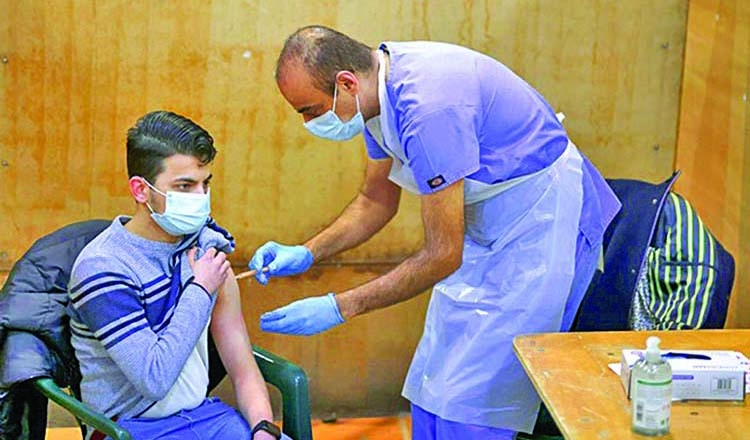 Britain should give an alternative to Oxford/AstraZeneca's COVID-19 vaccine to under 30s where possible due to a "vanishingly" rare side effect of blood clots in the brain, Britain's vaccine advisory committee said on Wednesday. Safety concerns have prompted more than a dozen countries in recent weeks to suspend use of the vaccine, which has been given to tens of millions of people in Europe, after reports linking it to a brain blood clotting disorder in a few dozen recipients.
Wei Shen Lim, chair of the Britain's Joint Committee on Vaccination and Immunisation (JCVI), said that based on the available data and evidence, the committee has advised that it was preferable for adults aged under 30 with no underlying conditions to be offered an alternative to the AstraZeneca vaccine where available, Reuters reports.
He said that for younger people, where the risks of hospitalization were much lower, the risk/benefit calculation of the Oxford/AstraZeneca shot meant others vaccines were preferable. "We are advising a preference for one vaccine over another vaccine for a particular age group, really out of the utmost caution, rather than because we have any serious safety concerns," Lim said at a briefing.
He said people should continue to have a second dose of the AstraZeneca shot if they had received a first dose. It came after Britain's MHRA medicine regulator identified a possible side-effect from the COVID-19 vaccine developed by Oxford University and AstraZeneca involving rare brain blood clotting. Chief executive June Raine said that the benefits of the shot outweighed the risks for the vast majority, echoing an update from Europe's medicine regulator also made on Wednesday.
Europe's and Britain's medicine regulators have been investigating small numbers of reports of a brain blood clots, know as cerebral venous sinus thrombosis (CVST), that have occurred in combination with unusually low blood platelet levels after people have been given the shot.
Munir Pirmohamed, Chair of the Commission on Human Medicines, said that the link between cerebral blood clots, lower platelets and the AstraZeneca vaccine was "getting firmer""Absolute proof of the link between the vaccine adverse events will need extensive scientific work based on the currently available evidence," he said at a news conference.
Deputy Chief Medical Officer Jonathan Van-Tam said the move would have only a negligible impact on the pace of Britain's vaccine rollout.The rollout of Moderna's shot began on Wednesday, while Britain is also deploying Pfizer's vaccine.
Raine said that over 20 million AstraZeneca vaccine doses had been given by March 31, with 79 case reports of the side effect and 19 deaths."This is a vanishingly rare, but sadly quite serious, adverse event... and you can't pick these kind of things up until you have literally deployed tens of millions of doses of vaccine," Van-Tam said.