'Satan Shoes' to be recalled as Nike settles case 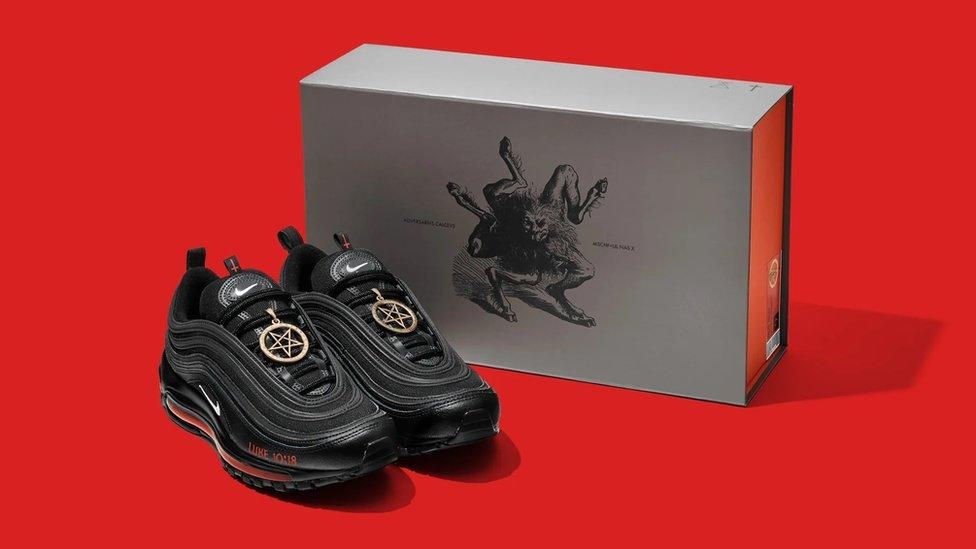 Nike says the art collective which made "Satan Shoes" that purportedly contain a drop of human blood in the soles has agreed to issue a voluntary recall as part of a legal settlement.
The $1,018 (£740) trainers are modified Nike Air Max 97s. Only 666 pairs were made and all but one have been shipped.
The collective MSCHG will offer full refunds to customers in order to remove the shoes from circulation, Nike said.
The settlement resolves a trademark infringement lawsuit filed by Nike.
The controversial shoes were produced by the Brooklyn collective in collaboration with rapper Lil Nas X, who held the last pair so he could choose the recipient. MSCHF said it would keep the final pair of shoes.
No further details were made public about the settlement, which includes the Jesus Shoes produced by MSCHF in 2019 also using the Air Max 97 as a base.
"MSCHF altered these shoes without Nike's authorization. Nike had nothing to do with the Satan Shoes or the Jesus Shoes," Nike said in a statement.
Limited edition shoes can fetch higher prices among collectors so it is not clear how many - if any - customers will return the products.
Nike sued MSCHF last week claiming the "Satan Shoes [were] likely to cause confusion and dilution and create an erroneous association" between MSCHF's products and the company. But MSCHF said the shoes were "individually-numbered works of art" and did not sow confusion.
Siding with Nike, a federal judge issued a temporary restraining order last Thursday.
David Bernstein, from the intellectual property litigation group at Debevoise & Plimpton and a representative for MSCHF, said the artistic messages the collective hoped the shoes would convey were "dramatically amplified" by the lawsuit.
"MSCHF intended to comment on the absurdity of the collaboration culture practiced by some brands, and about the perniciousness of intolerance," he said in a statement as news of the settlement emerged, adding that MSCHF was "pleased to have resolved the lawsuit".
MSCHF sold the black and red shoes in less than a minute last week. It coincided with the launch of Lil Nas X's latest song Montero (Call Me By Your Name), which had debuted on YouTube days earlier.
The song features the rapper, who came out as gay in 2019, celebrating his sexuality and rejecting attempts to shame him. In a heavily stylised music video, he slides down a pole from heaven to hell before dancing provocatively with Satan, then snaps his neck and steals his horns.
The imagery and the shoes both reference the Bible verse Luke 10:18 - "So He told them, 'I saw Satan fall like lightning from heaven'."