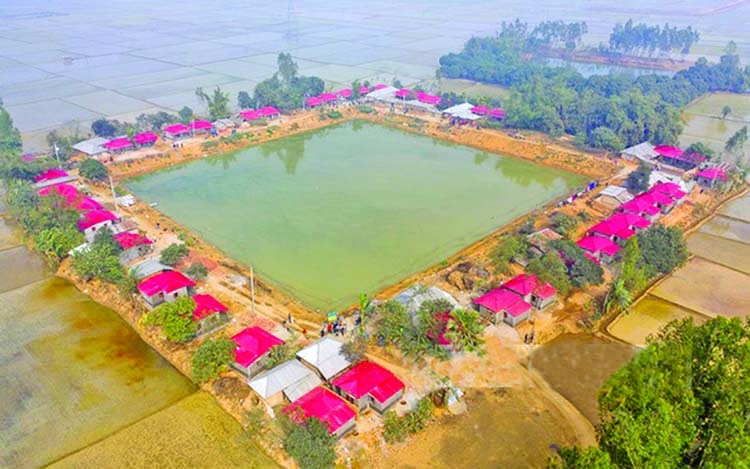 The government will build houses for 53,500 more families, who have no land or home, in June as Prime Minister Sheikh Hasina's gift in Mujib Year. The poor families will get the homes and land under the Ashrayan-2 project. At least 125,000 other families will be brought under the project in 2021-22 fiscal year.
The project's Director Md Mahbub Hossain updated divisional and deputy commissioners and field-level officials about the progress of work in a virtual meeting held from the Prime Minister's Office in Dhaka on Monday, bdnews24 reports. About 70,000 landless and homeless families across the country got their houses along with 2 decimal pieces of land under the project in January.
The government had in February ordered the divisional commissioners, deputy commissioners and other field-level officials to construct 50,000 more houses.Ahmad Kaikaus, principal secretary to Hasina, said the prime minister becomes emotional whenever she talks about the project to build homes for the poor. He ordered the officials to be careful to avoid deviation in the project. "
Please do not take it lightly," he said. The principal secretary emphasized keeping records properly so that the government can respond to allegations if any is raised.On behalf of Father of the National Bangabanshu Sheikh Mujibur Rahman Memorial Trust, Hasina donated Tk 50 million to the project on Sunday.PMO Secretary Tofazzel Hossain Miah ordered the officials to be ready to construct at least 125,000 homes in the next fiscal year.

After handing houses in the first phase, Hasina said gifting of homes to the homeless and landless people of Bangladesh marks the biggest festival in Mujib Year, the birth centenary of Bangabandhu Sheikh Mujibur Rahman.Under the Ashrayan project, over 320,000 homeless and landless families were given houses from 1997 to 2020.Following Hasina's announcement that no one will be without home in Mujib Year, the government made lists of over 885,000 homeless families and took the initiatives to change their lives.