26 die as speedboat collides with bulkhead 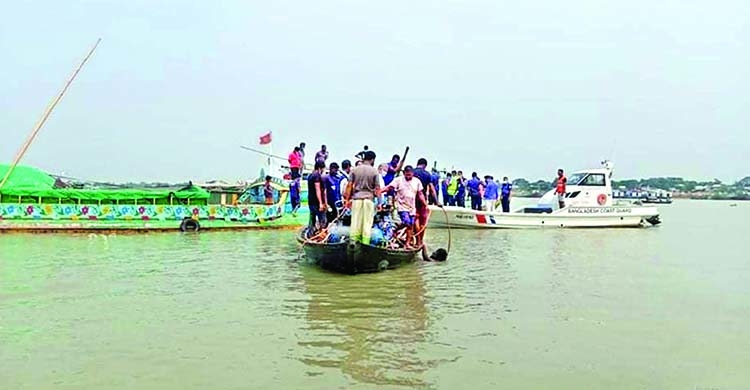 Collision between a speedboat and sand-laden bulkhead in Padma in Madaripur's Shibchar upazila on Monday morning leaves at least 26 dead. -AA
At least 26 people including three children and a woman were killed as a speedboat packed with passengers collided with a sand-laden bulkhead on the Banglabazar-Shimulia route in the Padma river near Kathalbari Ghat under Shibchar upazila of Madaripur district on Monday morning.
The identities of the deceased could not be known yet. On information, Shibchar Fire Service and Civil Defense and River Police rushed to the spot and carried out the rescue operation. The Banglabazar-bound speedboat from Shimulia Ferry Ghat capsized in the river after a collision with a sand-laden bulkhead, Mohammad Raihan, Fire Service and Civil Defence Headquarters Station Officer (Media cell).
Twenty-six bodies were retrieved from the river with the help of divers from local Fire Service and Civil Defence, police and Coast Guard members, said Raihan. He said four people injured in the accident were rescued by locals and they were taken to a local hospital.Meanwhile, the rescue operation is underway and more skilled divers of Barishal Fire Services are on the way to join the rescue drive.
Maritime accidents are common in Bangladesh, a delta nation crisscrossed by hundreds of rivers. Experts blame poor maintenance, lax safety standards at shipyards and overcrowding for many of the accidents. Vessels transporting sand sit low in the water and can be hard to see in choppy conditions, particularly when light is poor.In February 2015, at least 78 people died when an overcrowded ship collided with a cargo boat.