Success story of a student in capsicum farming 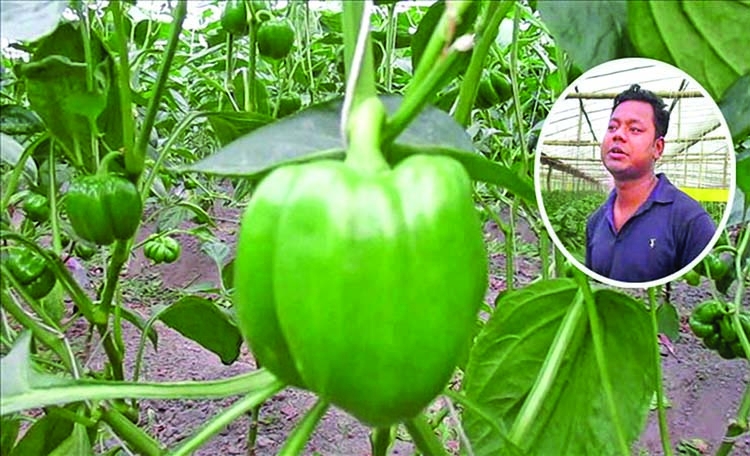 Rahul Rai, a university student, gets success in capsicum farming in Thakurgaon. -AA
Rahul Rai, an MBA student of Dinajpur Hajee Mohammad Danesh Science & Technology University, has become successful in capsicum farming in Thakurgaon using the lazy time during the corona period as the educational institutions were closed due to this pandemic.
The yield of capsicum was better as the soil and weather was favorable for capsicum farming. Many people from different parts of the district have been coming to see his capsicum orchard. Student Rahul Roy was courageous to build a greenhouse on 1.5 bighas of land in his village and cultivate this foreign vegetable commercially. It has cost him about seven lakh taka. The selling of capsicum has already been started. Capsicum is being sold at Tk 150 to Tk 200 per kg.
Rahul Roy said, at first I was a little scared thinking that if I fall into loss. Later, when the harvest came, I became hopeful. Three to four metric tons of capsicum will be produced, he hoped. He said, capsicum or sweet pepper is a popular vegetable all over the world and it's popularity is increasing day by day in Bangladesh too.
"Sweet peppers come in a variety of shapes and sizes. The fruit is usually round and the skin is thick. Although sweet pepper is not our traditional vegetable, its cultivation is expanding lately. It is in demand in the country's big elite hotels and various markets," he added.Besides, there is a lot of potential for exporting capsicum abroad. Because sweet pepper is the second most important vegetable in the world after tomato, he further added.
Locals praised Rahul saying, he is the pride of their area, and he has shown it is possible to make a profit by doing agriculture besides study. His success will inspire the unemployed youth of the area. Meanwhile, the agriculture department of the district has been continuously encouraging the farmers about the financial potential of this high value crop.
Md Abu Hossain, Deputy Director of District Department of Agricultural Extension said, "For the first time in the district, the foreign vegetable capsicum has been cultivated in 1.5 bighas of land." Many people are planting this vegetable on the roofs and courtyards of different houses as a hobby - we have been giving them various advices. It would be better if the farmers planted it commercially, he added.
---Firoz Amin Sarker in Thakurgaon