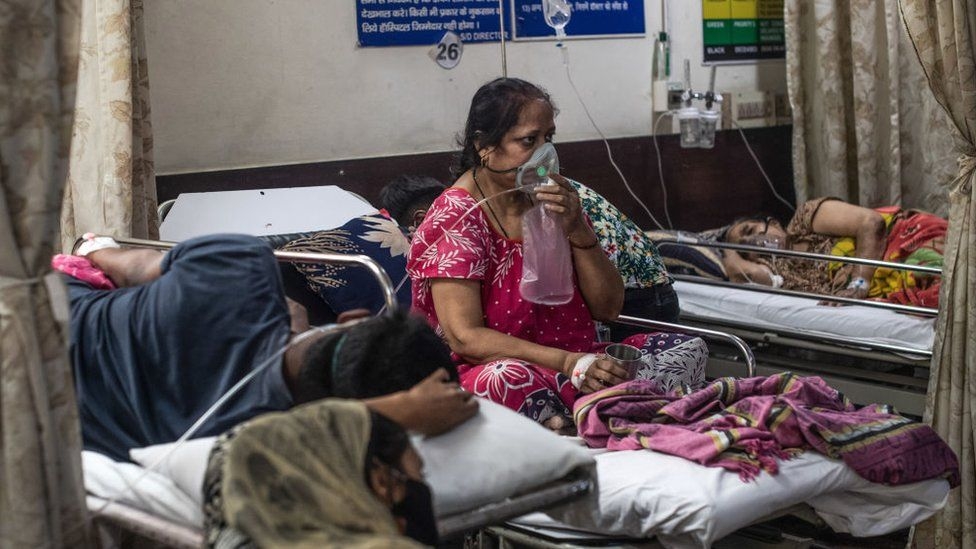 The number of new Covid infections in India has officially passed 20 million cases, even as the government says that infection rates are coming down.
India says infections have consistently dropped since 30 April, when it recorded more than 400,000 cases. It reported 355,832 cases on Tuesday.
Experts say the number of deaths and infections are being underreported.
In the capital Delhi, an oxygen crunch has shown no signs of abating and people are struggling for treatment.
The city reported that 448 people died on Monday - another record toll.
Delhi's government has said it wants the army to run Covid care facilities and intensive care units.
Delhi Chief Minister Arvind Kejriwal has repeatedly said that the city is not getting enough oxygen from the federal government, which allocates oxygen quotas to states.
But federal officials deny there are shortages, saying the challenge has come from transportation.
India produces thousands of tonnes of oxygen a day, but some experts say the supply crunch comes from a lack of investment in distribution networks.
Delhi hospitals have resorted to sending SOS messages on social media to secure supplies. For residents, hours spent in queues to top up portable canisters have become part of daily life.
Officials have also been urged to find more sites for cremations as the city's morgues and crematoriums are overwhelmed by masses of Covid deaths.
A sluggish vaccination campaign has compounded the crisis.
Despite being the world's biggest producer of vaccines, there is a shortage of supplies. Since January, just over 10% of India's 1.4 billion people have had one dose and only about 2% two doses.
The chief executive of India's Serum Institute, the world's biggest vaccine manufacturer, has warned shortages will last for months.
Adar Poonawalla told the Financial Times the institute had been unfairly maligned over the lack of supplies.