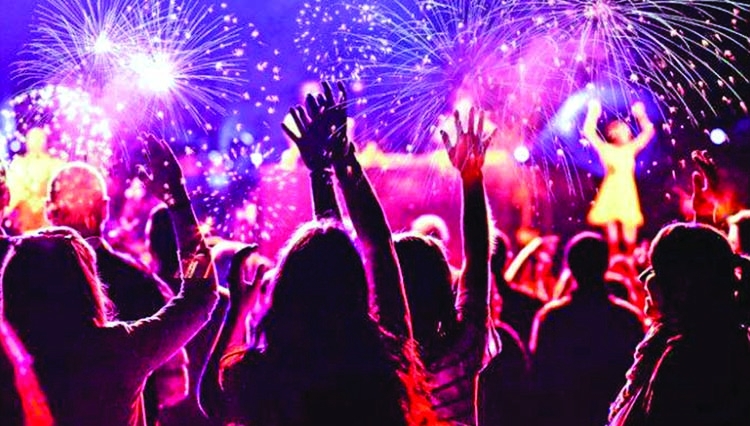 Years ago, having completed a month long tour in other different Indian cities, at the final lap of journey, my long time good friend, aretired Commodore in the Bangladesh Navy and I landed in Calcutta (new Kolkata) in the New Year's Eve and briskly checked in a elite Club in Kolkata. Along with my friend who was flamboyant in his trait and vibrant in drinking and dancing bout at the party, both of us were all set to enjoy the New Year's Eve at the Club where we checked in.
It was a late chilly December evening when the sun was sinking in the deluge of West sky prompting the events of New Year's Eve drawing near fast with the ticking of clock. I asked my friend to be meticulously dressed in dark lounge suite before we enter the venue of the party having smartly turned. With his long career in the Navy he had the good time to be a part of innumerous parties on board the ship or on the shore and was meticulous in following dress code. But alas! That time his wardrobe trolley did not mistakenly carry a dark lounge suit to meet the requirement of the New Year's Party. As I knew well about the hard and fast rule of dress code for that particular party, I suggested my friend to quickly buy a dark lounge suit befitting to the party from a nearby shopping mall.But, to our disappointment, shopping malls were all closed early because of New Year's Eve widely celebrated in Kolkata. My friend informed me that he had a combinations of a dark trouser and jacket which will trickily make a dark lounge suite even someone look at that closely at the bird's eye view. Having garbed in that stop-gap brand of combination, my friend appeared elegantly at the threshold of the venue and both of us were on the verse of stepping into the floor of venue which was then filled with heart throbbing rhythm of guitars and beat of drums and rose to a crescendo in the core of our mind ready to be a the part of the party soon. Alas! To our utter disappointment, at the entry point, we were stopped by a person no less than the honorary Secretary of the club, a Serving Brigadier General of the Indian Army with his reservation that my friend did not follow dress-code and therefore, was not eligible for entry in the party venue. Metaphorically, it was like a 'Clash of the Titans' featured in an old Hollywood movie then turned clash of two Generals wearing two different stars one being in silver and the other in bronze standing face to face in the New Year's Eve.
We tried to persuade the Brigadier and later the president of the Club in utter desperation with our approach that we were Bangladeshi guests having arrived in the Club only a couple of hours ago from Delhi and requested to treat us specially for the evening. Club Authority was not convinced with our plea and declined to consider our request favorably and that made us naturally much upset. We tried in vain to buy a lounge suit for Commodore for reason already stated above. Our mood of celebration and jubilation got faded and overcast with gloom. Commodore's face turned bleak. With utter dismay he asked me to enjoy the evening myself while he would prefer to stay back in the room and sleep with big sighs of disappointment. I was not ready to accept my friend's such proposal and was not ready to compromise with the situation either. As I turneda daredevil on the occasion,some ideas cooked up in my mind. I asked Mr. Bihari the head receptionist in the front desk to get us a lounge suite from Club's laundry. He exclaimed at my request and sincerely tried to oblige me. But the laundry was left with no suit suitable for my friend for that unique evening. In my desperation, I went one step further to ask Mr. Bihari to lend us his own lounge suit which he was wearing for the occasion. Bihari looked embarrassed as he was on duty, but nonetheless loved to oblige us. Both my friend and Bihari quickly exchanged their dresses in the club's changing room. My friend then looked more elegant and confident in dark lounge suit and we were entering the party area with dignity and pride overlooking the presence of Brigadier, in wry smile, which was still on his heel in the entry point like a solid rock to control the movement of the guests in party mood. We noticed that the Brigadier looked flabbergasted and was watching my friend from head to toes and failed to discover anything unusual violating the dress code then, well enough for him barring our entry. We applied our ready wit and enjoyed the evening with our hearts content. Ready wit works well indeed at times of crisis.
With heaving a sigh of relief, we entered the venue with grace and had exchanged pleasantry and greetings with other guests in jovial mood. After quenching thirst with sipping the elixir of golden fluid flowing aplenty, soon we came in full celebration mood and landed on the dancing floor with the beat and rhythm of ear-splitting sound of music. The more the sound of music was increasing, the more our feet were rocking and romping hard with renewed zeal well enough to create havoc on the dance floor fastidiously designed with eye blinding flashes of colorful lights and sounds. Celebration of the New Year's party went on till it was the break of dawn harbingering rise of a new Sun of the year in the Eastern horizon amid shrill clarion of the house-roosters ringing abuzz far away the premises of the club. At time of crisis ready wit really works well.


Mahbubar Rahman. The writer is a former Civil Servant.