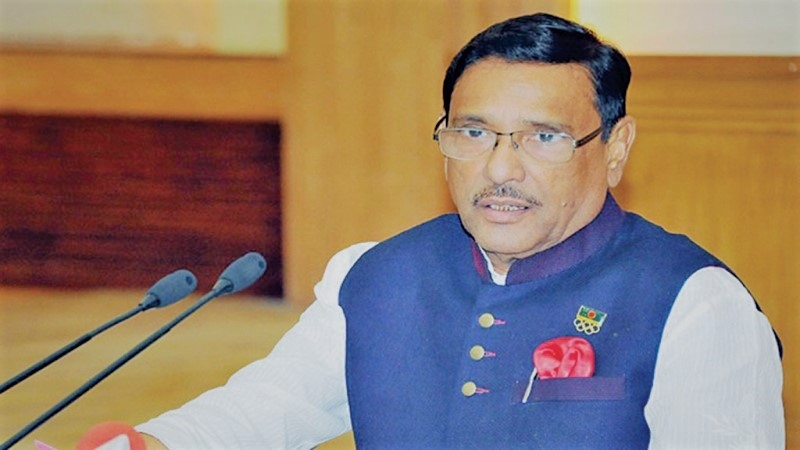 Road Transport and Bridges Minister Obaidul Quader today said the government has taken a project to make attractive the venue where Bangabandhu had delivered his landmark March 7 speech and Pakistani occupation forces surrendered to the liberation forces.
“Father of the Nation Bangabandhu Sheikh Mujibur Rahman was first to plant saplings at the Race Course ground. He had created it as an Udyan (orchard),” he told a press conference on contemporary issues at his official residence here.
Quader, also Awami League General Secretary, said Ziaur Rahman, who became the country’s president illegally, had established a children’s park covering maximum areas of the Udyan to erase the memories of the venue.
“Why environment activists didn’t raise any question at that time? Nobody made any comments during that period,” he mentioned.
He said in the name of beautification, many beautiful trees were cut down from the sides of the streets in Dhaka city and the beauty of the city was ruined during the period.
The minister urged all not to worry about the project as the government remains very much alert to this matter and Prime Minister Sheikh Hasina is going ahead with realistic initiatives.
Earlier, the minister joined a virtual view-exchange with BRTC and BRTA’s Dhaka Zone officials.
He gave directives to officials concerned to complete the road repairing works before monsoon and complete the works of ongoing key projects on priority basis.
Quader also asked the authorities concerned not to begin works of any new project before completion of the previous projects.
About the huge rush of home-bound people at ferry ghats, he urged all to celebrate the forthcoming Eid-ul-Fitr at their present locations to stop further spread of the deadly coronavirus throughout the country by responding to the call of Prime Minister Sheikh Hasina.
“Let us resist the deadly coronavirus with our united efforts. Remaining alive is the most important thing now. If we remain alive, we can celebrate many festivals in the comings days. Life is the foremost important thing and then the living,” he said.
The minister said negligence and indifference in abiding by health guidelines were seen at shopping malls and markets.
This situation could again lift up the falling tendency of the coronavirus infection rate reported in the last several days, he said.