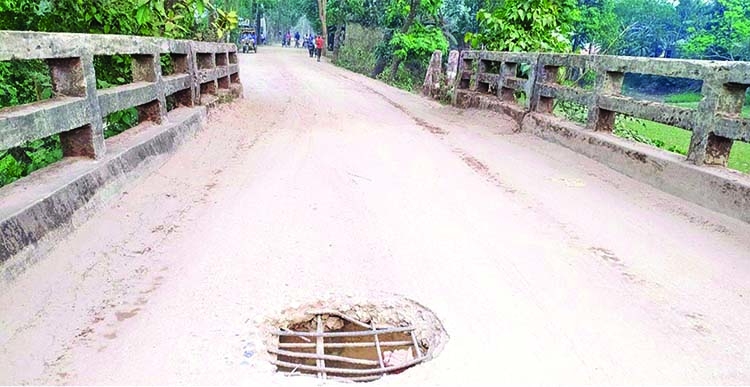 Damaged section of the bridge at Durgapur-Kalmakand regional road in Netrokona. -AA
A damaged bridge at Durgapur-Kalmakand regional road in Netrokona has become threat to the people of the area.  A fatal accident is waiting to happen at any moment and the authorities need to take measures to repair the bridge urgently, said concerned residents in the area. While visiting the bridge, there has been found a hole on the middle of the bridge.
The local victims expressed their displeasure and said that, the bridge called Bhanga Bridge of Burunga village on Durgapur-Kalmakanda road has been broken for a long time and pedestrians are moving with extreme risk.
Although such a condition has prevailed on the road for a long time, no initiative is being taken to reform it. As a result, the suffering of the locals and pedestrians is increasing day by day. They are suffering from the fear that any pedestrian may face a major accident in the dark of night.On Saturday, it was seen that small and big (additional sand laden trucks) vehicles were moving on the road with great risk.
Local ward Awami League president Md Sirajul Islam said, "This bridge has been lying in front of the road adjacent to my house for about two months. Accidents often occur in that broken bridge. The bridge needs to be rebuilt as soon as possible." Upazila engineer Aminul Islam Mridha told the reporter, "A signboard has already been put on the road as a risky bridge. Overloaded vehicles carrying sand have been banned after informing the upazila administration.
Excessively loaded vehicles can cause major damage to the bridge at any time. We demand for an allotment on an emergency basis to build the bridge."Upazila Nirbahi Officer (UNO) Mohammad Rajib-ul-Ahsan said, "I am aware of the risky bridge. However, the upazila engineer has sent the demand to the department concerned for its reconstruction. However, restrictions have been imposed on the movement of over-loaded trucks."
---Nirmolendu Sarker Babul in Durgapur