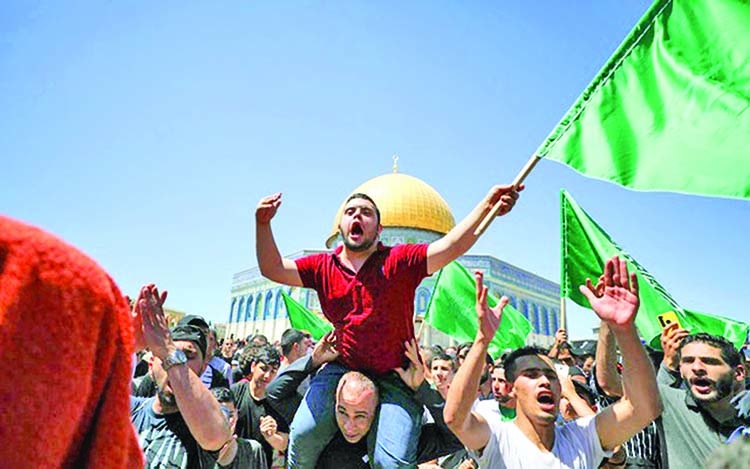 Israeli police fired rubber bullets and stun grenades towards rock-hurling Palestinian youth at Jerusalem's Al-Aqsa Mosque on Friday amid growing anger over the potential eviction of Palestinians from homes on land claimed by Jewish settlers.
At least 178 Palestinians and six officers were injured in the night-time clashes at Islam's third-holiest site and around East Jerusalem, Palestinian medics and Israeli police said, as thousands of Palestinians faced off with several hundred Israeli police in riot gear, Reuters reports. Tension has mounted in Jerusalem and the occupied West Bank during the Muslim holy month of Ramadan, with nightly clashes in East Jerusalem's Sheikh Jarrah - a neighborhood where numerous Palestinian families face eviction in a long-running legal case.
Calls for calm and restraint poured in on Friday from the United States and the United Nations, with others including the European Union and Jordan voicing alarm at the possible evictions. Tens of thousands of Palestinians packed into the hilltop compound surrounding the mosque earlier on Friday for prayers.
Many stayed on to protest against the evictions in the city at the core of the Israeli-Palestinian conflict.But following the evening meal that breaks the Ramadan fast, clashes broke out at Al-Aqsa with smaller scuffles near Sheikh Jarrah, which sits near the walled Old City's famous Damascus Gate.
Police used water cannon mounted on armored vehicles to disperse several hundred protesters gathered near the homes of families facing potential eviction."If we don't stand with this group of people here, (evictions) will (come) to my house, her house, his house and to every Palestinian who lives here," said protester Bashar Mahmoud, 23, from the nearby Palestinian neighborhood of Issawiya.