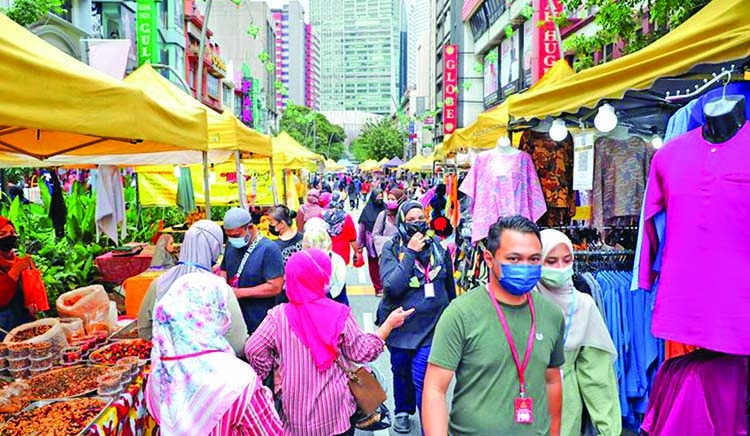 People shop at a Ramadan bazaar during a lockdown in Kuala Lumpur, Malaysia, on May 8, 2021. -Reuters
uAA News Desk
Malaysia's top health official on Saturday painted a grim picture of the country's struggle against the coronavirus pandemic, saying new cases could hit 7,000 a day by the end of this month. Malaysia was initially projected to record about 3,000 cases by mid-May, and 5,000 cases by the end of the month, said the Health Ministry's director-general, Tan Sri Dr Noor Hisham Abdullah.
"It was projected that Malaysia would record 5,000 cases by the end of May and around 3,000 cases by mid-month," he told a press conference at the ministry in Putrajaya, his first since March 4. "But now, two weeks before the  middle of the month, we have recorded more than 3,000 cases," he said, adding that with daily cases exceeding 4,000 in the first week of May, the figure could worsen if people fail to comply with health protocols."We expect 5,000 by mid-May now, and by the end of May, cases may rise to even 6,000 to 7,000, depending on us, whether we break the chain of infection."
He added: "These are a very crucial two to four weeks for us to contain the infection. We cannot succeed without the collaboration of the people. Stay at home if possible. Have an in-house Hari Raya among yourselves just like last year. Last year after Hari Raya, there was no surge of infections. Why can't we do it again?"
"Aggressive" Covid-19 variants from abroad are already spreading in several Malaysian states, with more young people being infected, Dr Noor Hisham said.He had on Friday warned that critically-ill patient numbers had hit a record high of 506 admissions, and said the government is adding more beds to intensive care units.
His warning comes just ahead of the Hari Raya festival on Thursday, when people typically throw caution aside by travelling to meet  families and friends.Even though travelling between states and districts is banned, Hari Raya visiting is allowed within districts, and capped at between 15 and 25 people, depending on which tier of the shutdown the state is in.
---ST