Can you mix-and-match Covid-19 vaccines? 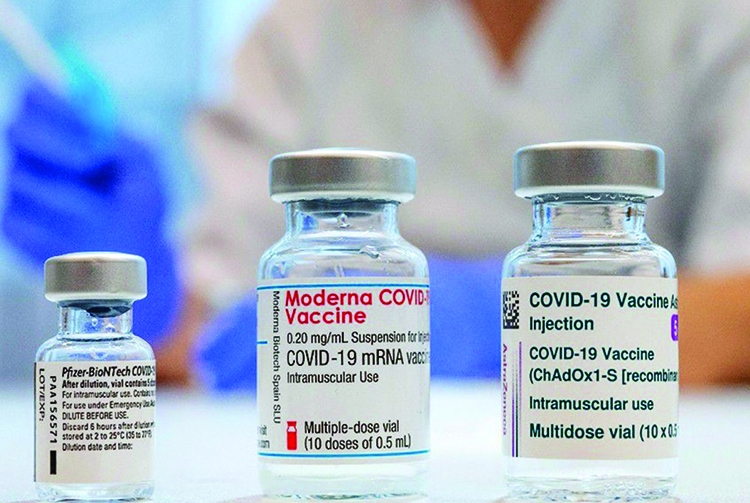 The Directorate General of Health Services (DGHS) announced last Wednesday that Bangladesh's stock of Covid-19 vaccines is running out, with only some 1.4 million jabs remaining in government hands.Given the current crisis in India, there is little to no hope of receiving the next consignment in accordance with the contract signed between Beximco Pharmaceuticals and the Serum Institute of India anytime soon.
Speaking at a virtual press briefing, DGHS spokesperson Robed Amin said: "We had around 10.2 million vaccine doses in our hands. Around 8.8 million have already been administered as the first and second doses. Now we have some 1.4 million doses in stock."He went on to warn that there would be a vaccine crisis if a fresh consignment does not arrive in the country before the existing stock is exhausted, UNB reports.
Robed said around 5.8 million people have so far received the first dose while three million of them have got the second booster dose to complete their course of the Oxford University-AstraZeneca vaccine. That leaves 2.8 million people yet to complete the course, of which 1.4 million can be covered from the current stock.
In the absence of any clear data yet on whether the vaccines can be mixed or matched, concentrating the remaining doses on letting as many people as possible complete their course is probably the right thing to do.But that still leaves 1.4 million people that current stocks cannot cover. In case a new stock of the same vaccine cannot be procured in time, is it advisable to mix vaccine doses?
The prospect of mixing vaccine doses offers a chance to bolster vaccine rollouts and, potentially boost the immunity provided, but evidence around the wisdom of this approach is scarce when it comes to Covid-19.However, it is "nothing new" to medical science, according to Dr Pierre Meulien, executive director of the Innovative Medicines Initiative (IMI), an EU and European pharmaceutical industry partnership.
"We have decades of experience in pre-clinical and clinical (work), especially in HIV, using these approaches," Dr Meulien told EU Horizons.Indeed, the measure has already been introduced by France and Germany for people who received a first dose of the AstraZeneca vaccine but are in age groups for which that vaccine is no longer recommended in those countries due to rare instances of blood clotting.
On 1 April, Germany advised that those under 55 receive an mRNA vaccine alternative, such as the Pfizer and Moderna vaccines, as a follow-up shot. Soon after, France recommended the same for people under the age of 60.All of the Covid-19 vaccines widely available, with the exception of Johnson & Johnson's (J&J) one-and-done jab, require two doses. The first dose primes the immune system and the second dose (usually administered a few weeks after the first) boosts it.