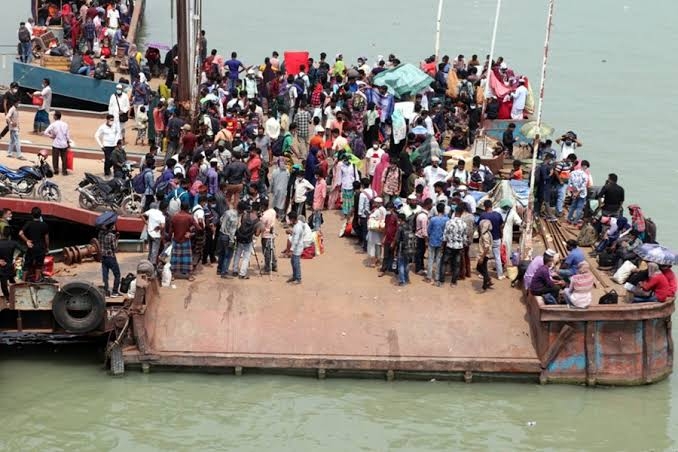 Despite the suspension on daytime ferries and the deployment of BGB troops, the crowds of people hoping to make their way home for Eid are still swelling at Shimulia, a river port.
Thousands of people still came to the port on Sunday morning to try and secure passage to the southern districts. The crowd only increased in size as the day wore on.
Though the BIWTC had operated 15 ferries overnight, it suspended the services in the morning. However, ‘Ferry Faridpur’ did leave Pier 1 around 7:45 am with eight ambulances on board.
Daytime ferry services were suspended, said BIWTC Assistant General Manager Md Shafiqul Islam, but some vehicles were allowed to cross due to emergencies and the crowd immediately swarmed onto that ferry.
“Despite the risk of the coronavirus pandemic, people are still rushing to get home. They aren’t following any restrictions.”
People were falling over themselves in order to get on the ‘Ferry Faridpur’ at Pier 1 on Sunday morning. It only took a few minutes for the vessel to be swamped with passengers.
The back of the ferry was so crowded with people that it could not depart. Eventually, police charged the crowd with batons and the small vessel was able to set off for the Kathalbari Port with nearly 1,500 on board.
Some people boarded fishing boats and trawlers to cross the Padma River near the port. River police have been detaining trawlers from the area.
Huge numbers of people have come to Shimulia Port despite the suspension of ferry services, said Mawa River Police Station chief Sirajul Kabir.
Failing to find a ferry passage, they resorted to breaking the rules by crossing the river in small, engine-operated trawlers, he said.
“These trawlers were carrying anywhere between 100 and 150 passengers,” he said. “We have detained 12 trawler drivers so far.”
Despite the ban on long-haul buses during the lockdown, some bus routes are still running in secret to cater to the overwhelming demand of Eid returnees.
People are travelling from Dhaka to Shimulia on district buses, small vehicles and even freight trucks and pick-ups in an effort to make it across the Padma and into the south of Bangladesh.
Despite the suspension of launch services, they are still trying to make the crossing from Shimulia to Kathalbari.
People have been instructed to stay near their places of employment because of the threat of the coronavirus pandemic, said Munshiganj District Magistrate Md Moniruzzaman Talukder.
“Despite this, there has been a torrent of people. Two platoons of BGB members have been deployed to handle it, alongside numerous police personnel.”