Bangladesh's health sector allocation likely to go up by 33pc 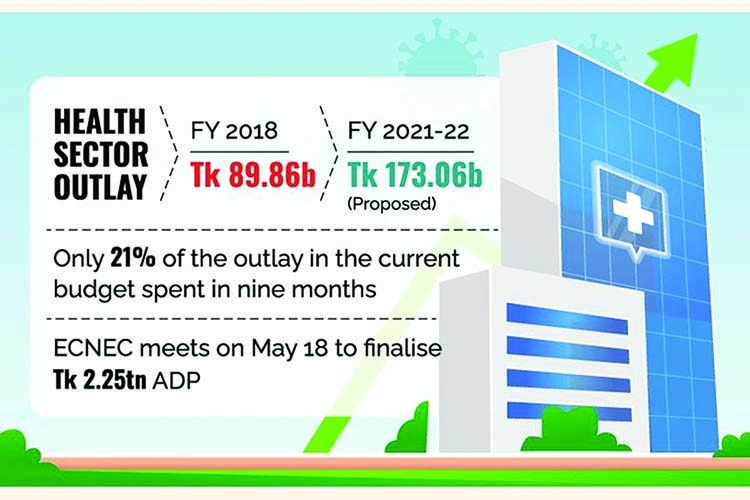 The country's health sector is likely to have a big leap with 33 per cent higher fund allocation in the upcoming development budget despite lackluster performance in the project implementation, officials said on Tuesday.
The Planning Commission (PC) has drafted a Tk 2.25 trillion worth of Annual Development Program (ADP) for the next fiscal year (FY) 2021-22 providing Tk 173.06 billion funds for the health sector's development, they added.
However, Health Services Division had been performing badly over the years as it had spent only 21 per cent of its total ADP outlay in the first nine months (July-March) of the current FY2021. The health ministry has failed to make any headway in their development work even after getting huge funds in the national budget, experts said.
Due to the Covid-19 fallout, the government, for the first time, is going to increase the allocation for the health sector by one-third in a bid to improve health services for the people. The upcoming development budget for this sector in the ADP will be almost double compared to that of four years ago in FY2018. In the FY2018, the outlay in the ADP for the health sector was Tk 89.86 billion. Despite poor performance in the project implementation, a PC official said, the government had given highest priority to the health ministry providing 33 per cent higher allocation in the next ADP compared to the outgoing ADP outlay.

The PC will place a Tk 2.25 trillion ADP for the next fiscal year before the National Economic Council (NEC) meeting, scheduled to be held on May 18. The proposed ADP outlay for the next fiscal year is 10 per cent higher than that of the original outlay of Tk 2.05 trillion and 14 per cent higher than the revised ADP outlay of Tk 1.97 trillion for the current FY2021.
A total of 1,515 development projects have been incorporated in the upcoming ADP. Out of the total funds, the Commission had proposed providing Tk 1.37 trillion from the government's internal resources and remaining Tk 880.25 billion from external resources as project aid.