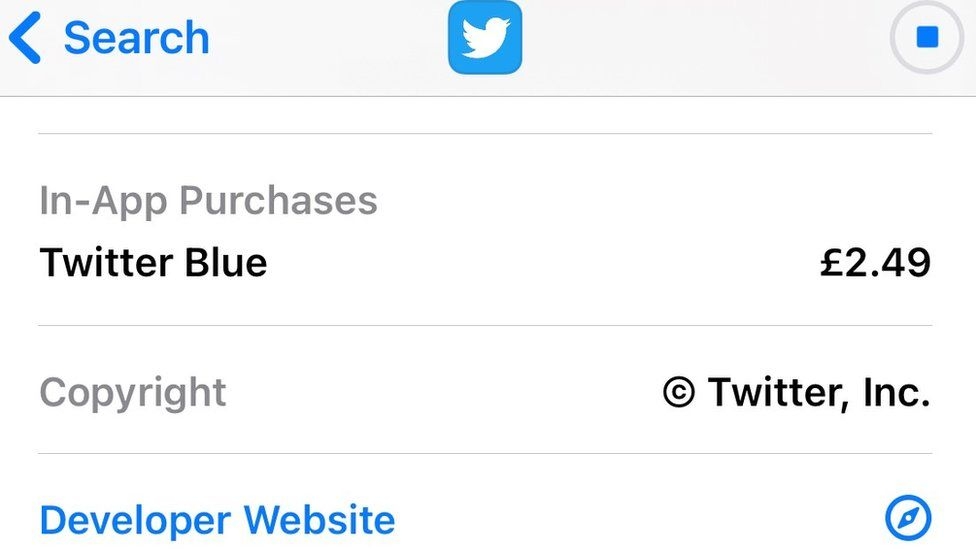 Twitter has listed a new subscription service on app stores, in an indication that the social media giant is preparing to trial the offering soon.
"Twitter Blue" is listed as an in-app purchase, priced at £2.49 in the UK and $2.99 in the US.
Twitter has given no further details, and declined to confirm online claims that the service could allow users to "undo" tweets.
It previously said it was working on special features for paid subscribers.
The firm wouldn't comment directly on the listing but highlighted to the BBC that it had previously announced plans to diversify its revenue sources.
Although "Twitter Blue" is now listed on app stores, it isn't yet fully enabled for users.
The BBC understands that pilot offerings of the subscription service are likely to start soon although it is unclear which countries it will be available in first.
According to technology blogger Jane Manchun Wong, who claims to be the first paying user of the service, it includes an "undo tweet" feature as well as a "reader mode" to make reading long threads easier. But Twitter has declined to confirm her claims.
The social media giant told the BBC that increasing "revenue durability" is the company's top objective.
The firm also plans to continue developing and experimenting with other ways to diversify its revenues beyond advertising this year and further ahead.
These plans could also include subscription services and other ways to offer individuals and businesses access to special features on the platform.
Twitter has also made clear that it will continue to focus on growing its advertising business.