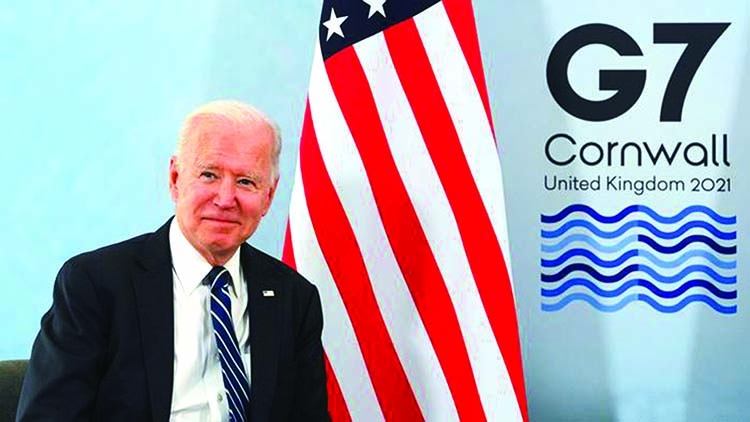 President Biden said the vaccine will be provided with no strings attached. -Reuters
US President Joe Biden on Thursday pledged 500 million doses of the BioNTech-Pfizer coronavirus vaccine to developing nations.
Biden made the announcement while taking to reporters after meeting with British Prime Minister Boris Johnson ahead of the G7 Summit in Cornwall, DW reports. Biden said that vaccinating the rest of the world was the only way to end the pandemic for good. "From the beginning of my presidency, we have been clear-eyed. We need to attack this virus globally as well," Biden said in a televised speech.
"This is about our responsibility our humanitarian obligation to save as many lives as we can. "In these times of need, the US needs to step up and help and lead." Biden said the United States would be "the arsenal of vaccines" to help poorer countries. Biden urges G7 to join in donating jabs
Biden's pledge would make the United States the world's biggest donor to COVAX, a UN scheme to distribute jabs to the developing world. He said that his fellow G7 leaders would join him in offering more doses to those who need them.
British Prime Minister Johnson wrote in the Times of London newspaper that wealthy countries should "shoulder their responsibilities" and "vaccinate the world", while French President Emmanuel Macron has joined Biden in calling for vaccine patents to be waived in a bid to make production cheaper.

Macron called Washington's offer "great news'' and urged other governments to follow their lead.
"I think the European Union needs to have at least the same level of ambition as the United States,'' he told journalists.
COVAX has thus far distributed just 81 million doses and several parts of the world, particularly Africa, are short on supplies.
Officials at the World Health Organization, a UN body that coordinates health policy, say that vaccination coverage in much of the continent stands at between 1-2%.