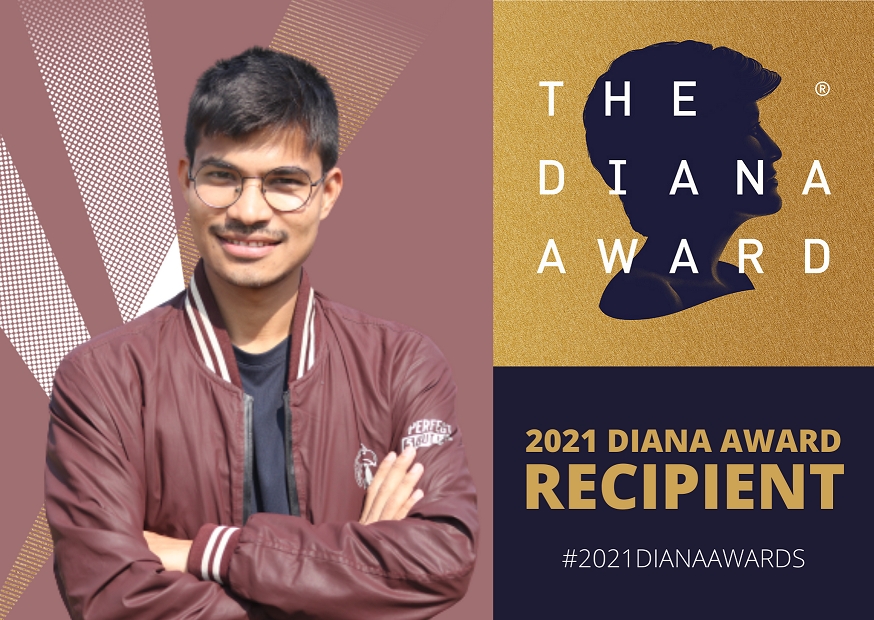 In recognition of activities of young people who are going beyond their expectations in their local communities to bring change, Ashoka Youth Venturer Yusuf Munna, a young social entrepreneur from Bangladesh, has been awarded the prestigious Diana Award.

Launched in 1999, the Diana Award is considered as the most prestigious accolade for young people aged 9-25 for social actions or humanitarian works. Their Royal Highnesses, Prince William and Prince Harry introduced the award on behalf of the Royal Family after their mother, late Princess Diana to honor young people working to improve the lives of others.

Yusuf founded Reflective Teens, a nonprofit teen-based creative platform that has been grooming teenagers with a view to making them worthy for the days to come through fostering creative abilities.

Reflective Teens has impacted the lives of more than 61,000 teenagers from different regions of the country including Chattogram, Dhaka, and Khulna, for the last eight years and aided their creative flourishing by inspiring them to take part in several innovative programs.

A few notable programs of Reflective Teens are Bridges Not Borders, RT Brainery, and RT Creator's Convergence. Ashoka Innovators for the Public, which is the world’s largest network of social entrepreneurs and changemakers has continually supported Yusuf on his journey.

The Global Director of the Ashoka Young Changemakers program, Mr. Yashveer Singh said, “Yusuf’s commitment to bringing change is exceptional. The impact that he has created through Reflective Teens demonstrates the power of a young person in changing lives and inspiring many other young people around him. We, at Ashoka are working towards building an Everyone a Changemaker world in Bangladesh where everyone particularly our young people realize their power to solve problems around them and bring change in their communities.”

As a recipient of the Diana award, Yusuf said, "The Diana award achievement is a huge inspiration for us all. It will help us increase the reach of our work and enable us to meet our goals through team effort. I believe that this award is not mine alone; rather, the entire Reflective Teens team is a part of this recognition. Without the guidance of the board and effort of the brilliant team members, we couldn’t have reached this far. This award is for all of them."

Yusuf Munna is currently studying Development Studies as his undergraduate major at Khulna University. In addition to being invited as a TEDx speaker in 2015, he was included as an Ashoka Youth Venture, a global network recognizing influential social entrepreneurs in 2017. In the same year, he was invited as a speaker for the Glocal International Teen Conference in Nepal.

Yusuf represented Bangladesh in the Global Partnership Summit, 2017 in India, and the Ashoka Changemaker Exchange, 2018 in the Philippines as the very first Bangladeshi youth. At present, alongside Reflective Teens, he has also initiated a virtual movement, #countECA, to include the evaluation of extracurricular activities alongside the academic records during university admission procedures in Bangladesh.