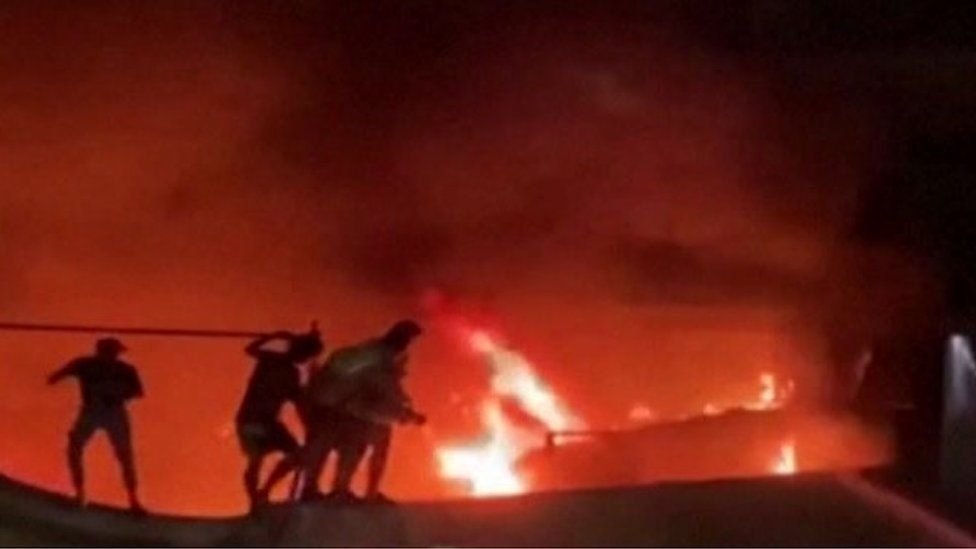 More than 50 people have died after a fire broke out in a coronavirus isolation ward at a hospital in Iraq.
The blaze at the Al-Hussein hospital in the southern city of Nasiriya was brought under control late on Monday.
The cause of the fire is unclear, but initial reports suggest it began after an oxygen tank exploded.
Iraqi PM Mustafa al-Kadhemi ordered the arrest of the head of the hospital. Relatives of patients have been protesting outside the building.
Reuters news agency reported clashes with police and two police vehicles set ablaze.
The new ward had space for 70 beds and was built just three months ago, medical officials told the Associated Press news agency. A regional health official said that at least 63 people were inside when the fire began.
"I heard a big explosion inside the coronavirus wards and then fire had erupted very quickly," a hospital guard told Reuters news agency. A search operation is continuing.
Iraq's parliament speaker Mohamed al-Halbousi tweeted that the blaze was "clear proof of the failure to protect Iraqi lives, and it is time to put an end to this catastrophic failure".
In April, an exploding oxygen tank started a fire that killed at least 82 people at a hospital in the capital Baghdad. Health minister Hassan al-Tamimi resigned after that fire.
The coronavirus pandemic has severely strained Iraq's health service, already suffering from years of war, neglect and corruption.
Iraq has recorded 1.4 million infections and reported more than 17,000 deaths from coronavirus, according to Johns Hopkins University data.
The country has given at least one dose of a vaccine against Covid to just over one million of its roughly 40 million citizens, the World Health Organization says.