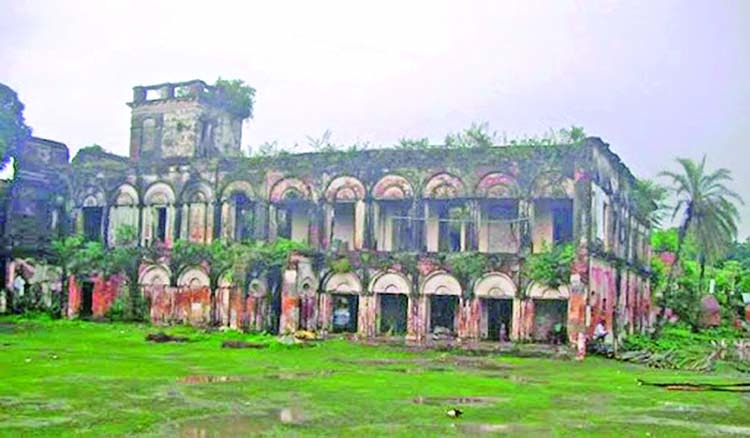 Teota Zamindar Palace is located at the ShibalayaUpazila of Manikganj District. This palace is locally known as TeotaRajbari and TeotaZamindar Bari. This palace is possibly over 300 years old. This old dilapidated palace was the home of two brothers named BabuHemsankar Ray and Babu Joy Sankar Ray who were the ruler of Teota.
The whole premise has over 50 rooms. Currently those are occupied by the homeless people. At the Western side of the building, there is a large pond and beside the pond a temple is located named as Noborotno Temple. The temple is a four storied building having a glorious example of classical architecture.
The whole palace is situated just beside the bank of mighty river Jamuna. After a few miles from the palace premise, the river merged with another big river, Padma. The palace is a two storied building and from the roof you can easily see the Jamuna river.This palace is the birth place of Promila Debi, the wife of our national poet KaziNazrul Islam. Poet first saw her in this palace when he came here to visit Promila's cousin-Dhiren Sen.

How to go
There are many bus services start from Gabtoli and Gulistan to any places in Manikganj. Those are for example, BRTC Bus Service, Shuvojatra Bus Service, Padma Line etc.
First you have to come at Aricha Ferry ghat. A BRTC bus from Gulistan used to come at ArichaGhat. Bus fare is near about 70 taka. It will require around 2.5 hours to 3 hours to come at Aricha. From the ferry ghat, you can take a rickshaw for 20 taka or auto for 10 taka to reach at the Zamindar Bari of Teota. It will take around 15 minutes to reach.

Things to do
Both of the river Padma and Jamuna are very near to the palace premise. So don't miss the chance to visit two giant river at a same day.

Eating facilities
There are restaurants nearby to check on at Aricha river ghat.Once upon a time Aricha was a busy place, but now a day there is nothing left. So may have to rely on PatuaryGhat for eating facilities.