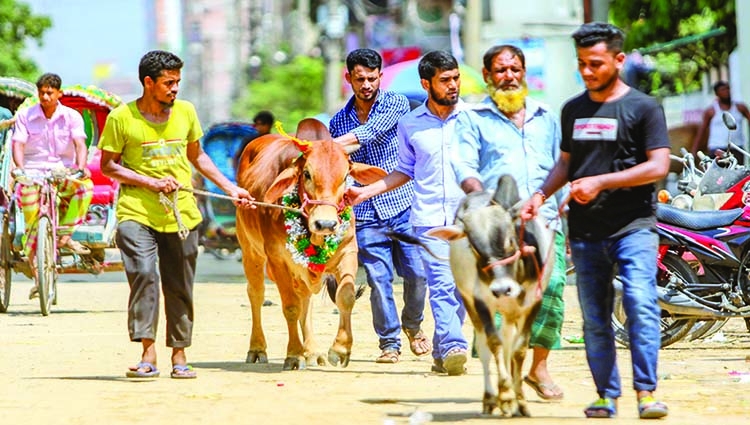 Marking the biggest festival of Eid-ul-Azha, the able-bodied Muslims offer sacrificial animals in the name of Allah the Exalted in a way prescribed by the Islamic Shari'ah to attain Allah's pleasance and nearness. Qurbani is an exposure of significant allegiance and religious ritual from the entire Muslim community across the globe.
The origination of this sacrifice, which started from the forefather Adam (PBUH), is to rise above all kinds of imperfection, lame reasoning, and intellect and surrender completely to the supreme commandments of Allah (SWT). As an example of absolute obedience to Allah the Almighty, Prophet Ibrahim (PBUH) headed to sacrifice his beloved son Ismail (PBUH) in the way of Allah (SWT). Due to his great loyalty to Allah's command, Allah (SWT) accepted his sacrifice. This incident is indeed a glorious example of accomplishing unconditional obeisance to Allah's command.
The incident has been summarized in the Holy Quran like- 'O son! I found out in a dream that I am slaughtering you. What is your opinion on the matter?' At the same time, Ismail (PBUH) replied: 'O father, do as you are commanded, and you will find me one of the patient ones' (Surah As-Saffat: 102). The fearful and sensitive state of obeying the command of Allah the Exalted amid both father and son and their sincere preparations for the execution of Qurbani was hundred percent authentic and immediately accepted by Allah (SWT).
Allah the Exalted has mentioned in the holy Quran: 'And we have included the sacrificial animals among the signs of Allah (SWT) for you. Therein is good for you' (Surah Al-Hajj: 36).In the regard to Qurbani Great Prophet (PBUH) said: 'Whoever makes a sacrifice with a cheerful heart, there will be a barrier between him and Hell on the Day of Resurrection (As-Sunanul Kubra Lil-Bayhaqi). Prophet Mohammad (PBUH) himself performed Qurbani every year in Madina and his loyal companions also executed it on regular basis. Since then, it has continued among the able-bodied Muslim Ummah as a basic and obligate part of Ibadat.
One of the things to be very conscientious about is that the Qurbani will be for the exclusive purpose of gaining the pleasure of Allah the Almighty through halal and legal means. Qurbani must be performed only with the utmost interest of the mind, in obedience to the dictation of Allah, to follow a provision of the Islamic Shari'ah as a practical example of following the Sunnah of the Prophet Ibrahim (PBUH). In this respect, Allah (SWT), noticing his beloved Prophet Mohammad (PBUH) says: 'Perform Salat and make Qurbani for the sake of your Lord' (Surah Al-Kawsar: 2).
The important precept of Qurbani connotes the downright surrender to Allah (SWT) and the prostration without question in front of all the commands of Allah is the paragon manifestation of whole-hearted surrender. Allah the Almighty tells: 'Surely the flesh and blood of the sacrificial animals do not reach Allah (SWT) but your Taqwa (sincerity) surely reaches Him' (Surah Al-Hajj: 37).
Sacrifice is not only a customary religious rite for Muslims but also a constitutional practice of casting a sacred life. Hence, before placing a knife to the neck of the sacrificial animal, one has to approach a knife to the neck of the animal that is hidden among oneself. One has to surrender and sacrifice in the court of Almighty Allah. Here a devout Muslim makes the declaration: 'My prayers, my sacrifices, my life, my death are all for Allah, the Lord of the worlds' (Surah Al-An'am: 162).
Executing Qurbani is not a sheer religious custom itself. Rather, a sacrifice must be done in a bid to gratify Allah and ignite the fear of Allah (SWT) in the heart. Qurbani is a momentous Ibadat as its practice is not only for the Ummah of the Prophet Mohammad (PBUH), rather the formerly Ummah was entitled to perform Qurbani following their existing procedure. Allah the Almighty says: 'I have introduced a method of sacrifice for every community, so that they may pronounce His name on the animal slaughtering which Allah (SWT) has bestowed upon them' (Surah Al-Hajj: 34).
There are also diverse people in this country who, after the sacrifice, store the total meat in the refrigerator and meet the need for meat all year round! It may be permissible in the eyes of the law, but there is also a concept named- humanity. And the Hadith Sharif also justifies that we should eat the meat of the sacrificial animal on Eid day and in the days to come and distribute it among the poor and needy ones. Through the arrangement of Qurbani, the destitute neighbors are also entertained.
Moreover, Qurbani creates a cycle of money flow between the rich and the poor. Here the eligible and rich section can take part in the production process of marginalized people and come forward to construct a balanced society. By purchasing sacrificial animals they also can contribute the means of helping their fellow Muslim brothers in terms of monetary transactions.
Through sacrifice, the respective Muslim individual will have to take a new oath and swear that he will give his life and property in the way of Allah (SWT) against all kinds of unjust, oppression, and tyranny and this is the intended success of a believer. Henceforth, we hope the sacrifice we make will be accepted by Allah (SWT), the Most Benevolent, and the Most Merciful.


Wares Ali Khan is an academic.