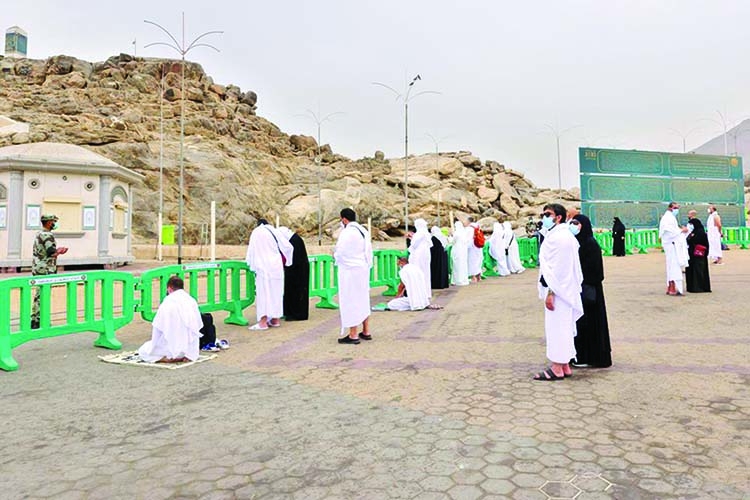 Muslim pilgrims gather at the plain of Arafat during the annual Haj pilgrimage, outside the holy city of Mecca, Saudi Arabia July 19, 2021. -Reuters
Thousands of face-masked Muslims gathered on Saudi Arabia's Mount Arafat on Monday, praying for an end to the pandemic and faster vaccination as the annual hajj pilgrimage reached its climax.Saudi Arabia, home to Islam's holiest sites in Mecca and Medina, has barred worshippers from abroad for a second year running and restricted entry from within the kingdom to guard against the coronavirus and new variants.
Only 60,000 Saudi citizens and residents, aged 18 to 65, who have been fully vaccinated or have recovered from the virus and who do not suffer from chronic diseases, were selected for the rite, a once-in-a-lifetime duty for every able-bodied Muslim who can afford it. "
It is an indescribable feeling that I got selected among millions of people to attend the hajj. I pray for God to put an end to these hard times the whole world has gone through under the coronavirus," said Um Ahmed, a Palestinian pilgrim who lives in the Saudi capital Riyadh and said she lost four family members to the virus, Reuters reports.
At the Namira mosque, pilgrims sat two meters apart on their prayer mats, some shedding tears and others raising both hands as they prayed at noon.
Karimullah al-Sheikh, from India, said he was praying for his country, which has seen a surge in infections, to get rid of the virus and for everyone there to get vaccinated promptly.Hafiz Kadiku, an American working in Saudi, said he had broader wishes: "There is so much racism ... I pray to Allah to make everyone love one another."
In previous years, more than two million pilgrims would cover the rocky mound on the Arafat plain, sitting close to each other in the scorching heat of the desert city of Mecca, carrying umbrellas and fans to keep cool.This year pilgrims, dressed in white robes to signify purity, observed social distancing and wore face masks on Mount Arafat, the hill where Islam holds God tested Abraham's faith by commanding him to sacrifice his son Ismail, and where the Prophet Mohammad gave his last sermon.
Sheikh Bandar Balila, delivering the Arafat sermon during the haj's most important rite, praised the efforts of Saudi authorities to ensure safety and prevent the gathering from becoming a focus of the pandemic.Arafat, Mina and Muzdalifa, a few kilometers east of Mecca, are the main sites of hajj.
After spending the day on Mount Arafat, pilgrims move to Muzdalifa on Tuesday, the first day of Eid al-Adha, or the feast of sacrifice. There they gather pebbles to throw at stone columns symbolizing the devil."The first prayer is to ask God to lift this pandemic, this curse and this grief for all humanity and for Muslims, so in the next years they are able to attend hajj and for millions to refill these holy sites," said Maher Baroody, a Syrian pilgrim.