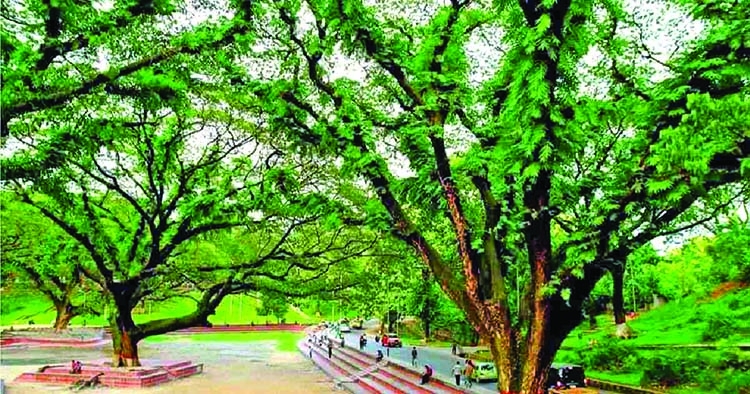 Century-old trees at CRB Shirishtola. -Collected
A lawyer has filed a case in a court here Monday seeking a ban on constructing a hospital in Chattogram's CRB area what he claimed would harm the environment.Advocate kazi Sanwar Ahmed Lavlu, a member of district Bar Association, filed the case with the Chattogram assistant judge court-1, reports UNB.
The court has taken the case into cognizance but hasn't passed any order. Sixteen officials were named in the case including Secretary of Ministry of Liberation War Affairs, Chattogram Metropolitan police commissioner, Deputy Commissioner of the district, Director of Chattogram Environment Department, Secretary of Chattogram Development authority and Press Club Journalists association.
The lawyer said destroying the natural resources of the hill surrounding CRB for building a hospital is unacceptable. The 16 people have been accused so that no one can assist in establishing the controversial hospital, he said.Bangladesh Railway, which owns much of the land in the CRB area, struck a deal in March 2020 with United Enterprise and Company (owners of United Hospital in Dhaka) to build a 500-bed hospital and 100-seat medical college on six acres of land in CRB.
The idea to build a hospital under Private Public Partnership in CRB was first broached at a meeting of the Cabinet Committee on Economic Affairs (CCEA) on August 14, 2013. The committee's approval for such a project would have to wait seven years, till February 2020. Prime Minister Sheikh Hasina gave her all-important approval the same month.
However, residents of the Port City got a rude shock when they came to learn about it on a signboard that appeared at the intended site some weeks ago. Nobody who came to know about it seemed to have their spirits lifted by it. Their disgruntlement was always bubbling under the surface. Over the last week, the residents of the Port City were disgruntled seeing a signboard of the hospital that appeared at the intended site. The disagreement soon turned into a movement against the hospital planned at CRB, and kept gaining momentum.
On Friday, they held rallies, a tree plantation program, formed a human chain and even engaged in other forms of revolt all day. A legal notice has already been sent to concerned individuals  including the Cabinet Secretary, Secretary of the Ministry of Railways, Director General of Bangladesh Railways and a few others by the Bangladesh Human Rights Foundation'  on behalf of the protestors to remove the hospital site elsewhere.