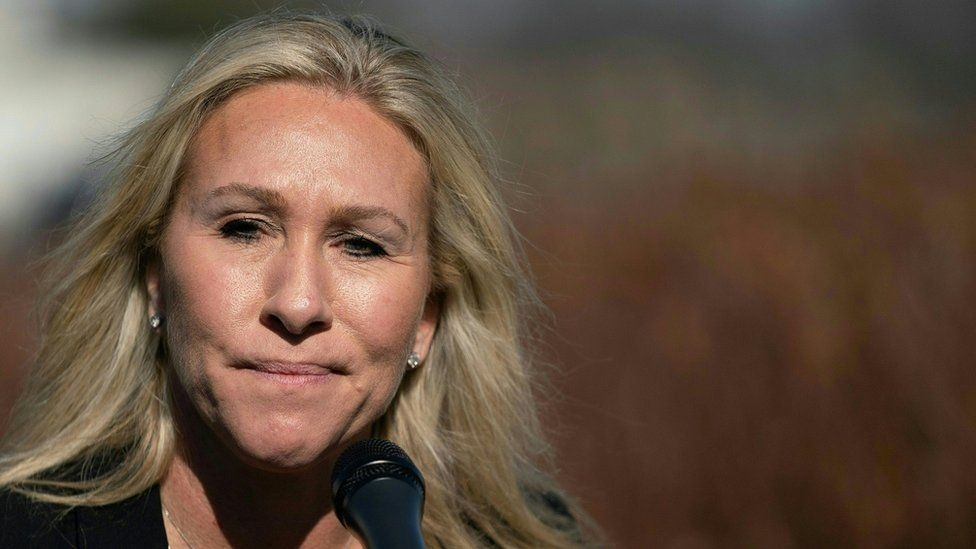 Twitter has temporarily suspended Republican lawmaker Marjorie Taylor Greene for posting "misleading" information about coronavirus.
The social media giant said her account would be in "read-only mode" for 12 hours.
Ms Greene, a Republican congresswoman, has been an outspoken critic of vaccines and the use of masks.
Last month she apologised for likening coronavirus mask rules to the treatment of Jews in Nazi Germany.
In two tweets on Monday, she argued that vaccines should not be required, and that Covid was not dangerous for people aged under 65 who are not obese.
Both posts are still on display, but have been tagged by Twitter as "misleading".
Ms Greene was suspended from Twitter in April, but the company later rescinded the ban, saying it was a mistake caused by its automated moderation system.
In response to her latest suspension, Ms Greene said Silicon Valley firms were attacking free speech with support from the White House.
"These Big Tech companies are doing the bidding of the Biden regime to restrict our voices and prevent the spread of any message that isn't state-approved," she said in a statement to the New York Times.
Last week, Democratic President Joe Biden urged social media firms to take more action against the spread of false information on their platforms about coronavirus and vaccines.
"They're killing people," Mr Biden told reporters. "The only pandemic we have is among the unvaccinated."
US health officials have warned that the country's current spike in Covid-19 deaths and infections is exclusively hitting unvaccinated communities.
Twitter has repeatedly banned users for shared misinformation, and in March it introduced a new policy with penalties for users.
Under the new rules, 12-hour suspensions are given for second and third violations of its policy. A fourth violation results in a week-long suspension, and a fifth leads to a ban.
In January, Twitter permanently suspended President Donald Trump for posts that it said incited violence after the storming of the US Capitol by hundreds of his supporters.