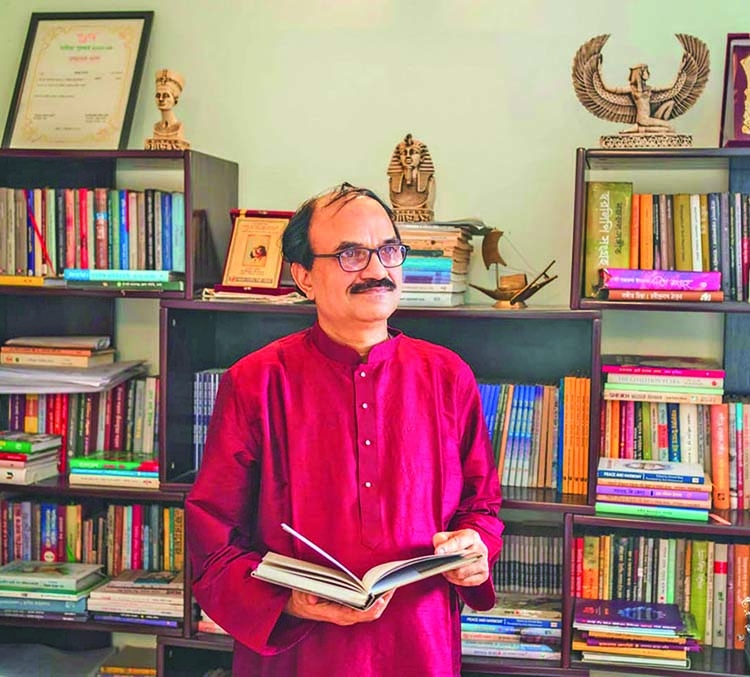 Poet Aminul Islam
The imaginative thoughts and perceptions that can establish cognitive and communicative dialogues and conversations with Nature and Inhabiting Surroundings of lives are likely regarded and recognized as Poetic power or Poetic Creativity. And the very terms- Ôdialogues and conversations' inevitably require the application of language for their manifestation to meaningful expression. In other words, this is language and only language that can translate the said Ôthoughts and perceptions into significant creation of metrical art.
Probably Keeping this truth in mind Mallarme said Ò Poetry is not written with ideas, it is written with words,'' and some other poetry-analysts asserted that Ò Poetry is words". S.T. Coleridge, one of the most famous romantic poets of England, also denominated poetry asÒBest words in the best order". In like manner, American Philosopher poet Ralph Waldo Emerson, in his essay titled ÔThe Poet', announced that ÔÔ Words are also actions, and actions are a kind of words''. Remembered, here the word `words' certainly refers to the formative inductions of language.
In connection to the notion of relation between poetry and language, we may relevantly allude to some of the definitions of language ever made by some renowned linguists, such as Henry weets, in his book `The History of Language' says-ÔÔ Language may be defined as the expression of thoughts by means of speech-sounds,'' while A.H Gardiner, in his Speech and Language', defines language as-ÔÔ Language in its widest sense means the sum total of such signs of our thoughts and feelings as are capable of external perception and as could be produced and repeated at will,'' and in the book `language and Its Structure', Roland W. Langacker mentions language as-ÔÔA Language is a device that establishes sound-meaning corretations, pairing meanningswith signals to enable people to exchange ideas through observable sequence of sound.''
From these above-cited definition of language, we can easily imagine what role does language play in making poetry, even say, in winding up any kind of literary art and work. Semantical sequence of speech sounds and their rhythmic flows are traditionally and historically believed to give shape to thought, theme and aesthetic beauty of poetry. In consideration of these Literary Phenomena, we can reach a hypothetical inference that poetry is grossly a mesmerical as well as an intellectual game of words or language with elegant artistry, idealistic feelings, realistic eruditions and deep insights of human soul.
Hence a poet is usually expected to possess a strong hold over the concerning language along with a neat mastery to treat it for metathetical and metonymical creation of imaginery as well as romantic ideology. Here it is to deem that this very conjectural ideology, in fact, bears and inhales the higher and nobler truths of corporeal existence of life. Thus it can approximatelybe concluded that a poet is an architect of wore-castle, charmer of word-magic, and hypnotizer of word-cast spells and passions.
Poet Aminul Islam, in persuasion of the above-said points and tenets of poesy, I think, has fashioned a potential orb of poetic diction of his own. In this connection, shafiuddin Ahmed, in his essay `Aminul Islam: The poet of Root Opulence', says- ÔÔ Making a cloister in his own world of speech and language sequence, he rises up to a brilliant splendor of his self-radiance''.
(Dristy, Aminul Islam Issue by Biren Mukherjee; February, 2020, page-21. His manner of word-collection, pattern of word-stuffing, style of lingual presentation and seemliness, lexicographicdignity and sublimity, thought-releasing simplicity and the form of thematicreflections-- all are substantially and ornately special and different from his contemporaries.He picks and acquires his language from almost all the spheres of human situations, and bestows and endows them with multifarious essences of prevailing realism.
In his poetic vocabulary we notice spontaneous strolling of words from mythical and legendary fables and maxims, historical events, mystical gleves, traditional old country shades of nature-bound corny and ritualistic rustic life, bureaucratic phraseologies of deceiving senses, absorbing lingo-tongues from foreign paroles, most modern scientific and technological terminology and so on; and thus he fabricates a complex fusion of folksy, colloquial, dialectic, demotic, hierarchic and academic flavours of acousticdealings in his poetry.
For this wide variety and diversity of sources of his philologicalfervours his similies, metaphors, conceits, alliterations, allusions, pictography, imagery and all other rhetorical and prosodic ingredients are found significantly rich and unique.
And here, we would like to say, lies his achievement and distinction as a poet of authentic human Interest and socio-sophical speculation of mundane life. Poet Aminul Islam, throughout the whole realm of his poetry, very often speaks of the abnormalities, incongruities, absurdities, maladies, ills, and pernicious injuries of the ongoing global perspectives.
But certainly noted, he is neither a misanthrope nor a pessimist, rather he is always seen upholding the philanthropic and optimistic aspirirations of life with unwavering oath and confidence. As per neutral observation, he is, in fact, marked simultaneously attempting to depict both ailing and healing aspects of human plights on the earth.
That is, he, on the one hand, tries to show the atrociousconditions of the human planet, and on the other, he also quite cordially desires to see a harmonious well-beingness of man's life that will be free from all sorts ofmalices and malignities. A few references, we think, may get presented here from Aminul's poetry with a view to making a little proof of what so long has been said about his poetical trends and techniques. In his poem "Mother', the poet says-

"I love so much my mother
Seek the key to heaven under her foot
Write story, poem and song on her
'O my mother'; my eden lies beneath thy foot."

Here he shows two things together; one is the soul-born love for mother traditionally nourished in our Bengali culture, and the other is an allusion of religious myth to Heaven and Eden which in poet's words are Zannat and Behest. In another poem titled 'Freedom Fighter', his words are-

"In this very beauty-parlour night
Why do you compose the darkness?"

The term 'beauty-parlour' belongs to English parole but the poet has used this one in such a way that it appears not as a foreign diction. Not only that, it also makes a connotative cognition of symbolic significance and aesthetic splendour of literary artistry. In other poem named 'Audit Complaint', Aminul's assertion is-

Here we notice a keen passion of grief grown out ofthe sense of honest performance when the doer faces series of unhealthy adversities in his work-fields. Some more quotations and citations from different poems by Aminul Islam are paraded below, from which, we guess, his readers will be able much to imagine the range and variety of choice and usage of his parlance. The drill of lines, designed here, is as follows-

"With interference of headman uncle of the village
A dog is offered promotion
Post-name is watch-hound."
(A Village Tale)

"Thus we reverted the bending doomsday towards heaven
As oneday the Dravidians of Karota Banks
Pushed back the aggressive Aryans."

" In those days and nights
I used to bring you up on my shoulders
As does the magic-Lamp spirit of Aladin."
[ Devjani's Revenge)

"From this very day man's only identity is that
he is merely man and nothing else."
(Nelson Mandella)

"In doing so I have passed away
the boy hood and adolescentdate
Nobody knows when father grew old
and received the aging fate."
(Father)

"O gold spoon,O silver spoon -O the happy cot
You had haply been locked
In the decadent cage of Manorhouse
And is this the reason there will dwell
no twig-pen in bards' homestead?"
(Stream's Erosion Islse' Fest)

"On seeing the scene of changing your blouse .
The Walton Dressing Table may not have known
But this is the Himalayan truth that
Nothing grows so graceful as the budded tiding is."
(Standing at Confused door)

Along with the above-shown quotations we would like to add here a further short-list of some single words and phrases that includes -- digital silence, ringtone, four-colourpowerpoint presentation, diagnosis, homosexual day, delete button fail, painsborn nicotine, business magnet, skintight blows, topless dawn, basket of recycle bin, dollar drunkard, internal audit--mind, crime book of police station, classified documents, first class gazetted officer, savings account, magic-lamp sprit of Aladin, Goya gypsy's snake and so on. Fantastically observed that all these lingual assets and phenomena are treated so craftily that they seem quite relevantly adopted with the themes and contents the poet deals with.
They again prove to be the tongues of folk tradition, nature-bound situations, fables, fantasy, maxims, myth, legend, idioms, religion, history, science, technology, modernism and the so. But all of them are certainly employed to limn the realistic aspects of life. In  reference to his relation with nature and country-life, he himself says--``since my childhood, I have been a tireless devotee of rain and rever". He further more says -''inany sense I am the offspring of water, in mind I am out and out attached to Nature."These utterances of poet's own lips can be taken as evidence of authentic stamps of his poetic aspirations and commitments.
Probing and ponderous study of Aminul's poetry makes us feel his deep sympathy for human realism. From this point of poetical revelation, we can come to form vivid ideas about his literary conjectures. He is never in favour of the doctrine of `art for art's sake'. Rather he absolutely believes in the ruminations of ``art for life's sake.'' In accordance with this creed of literary art, he always sketches the portraits of all the avenues of human life. For releasing all his ideas in full, he very often trives to make detail delineation.
This practice sometimes looks like a kind of exaggeration which,to a little extent, seems to hamper the beauty and artistry of his poems. But as per an overall estimationAminul Islam appears to be a blessed artisan of poetry and he inbornly possesses almost all the attributions of a true poet. In fine, it may now be boldly said that aminul's poetry is a fertile source of soothing-pleasure and intellectual cultivation of human insight. His contributions to the world of poetry will survive for long and longer time as they are considerably immense and impresive.