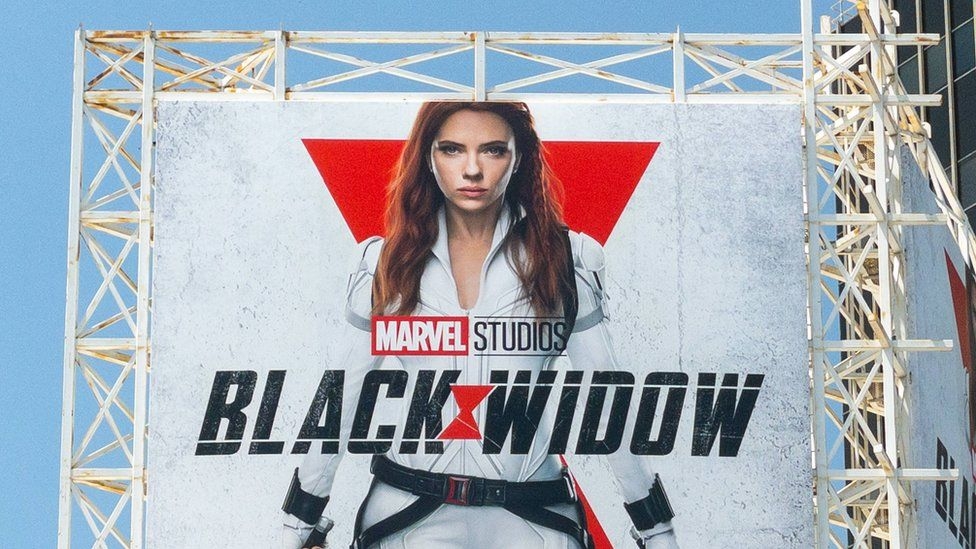 Hollywood star Scarlett Johansson is suing Disney for breach of contract for streaming her film Black Widow at the same time as its cinema release.
The superhero film set a box office record for the Covid-19 pandemic when it came out this month, grossing $218m (£157m) on its first weekend.
But box office receipts then fell sharply and Ms Johansson argues she was deprived of potential earnings.
Disney did not comment immediately on the lawsuit filed in Los Angeles.
Ms Johansson says she was promised by Marvel Studios, which is owned by Disney, that Black Widow would be a "theatrical release", and that she had understood this to mean a traditional "window" of time would pass before it would be streamed.
On its first weekend, Black Widow took some $80m in ticket sales in North America and $78m internationally, plus at least $60m in Disney+ Premier Access rentals.
Sources close to the actor project that she lost $50m, media reports say.
Before the pandemic Hollywood film fans would typically have to watch new releases at the cinema or wait three months to have them streamed to their devices.
Major studios have recently been mixing cinema releases and streaming in different ways as cinemas battle to win back viewers wary of catching the virus in confined spaces.
Warner Bros, for instance, will release The Suicide Squad both in cinemas and on HBO Max next month.