First look at Staunton as The Crown's new Queen 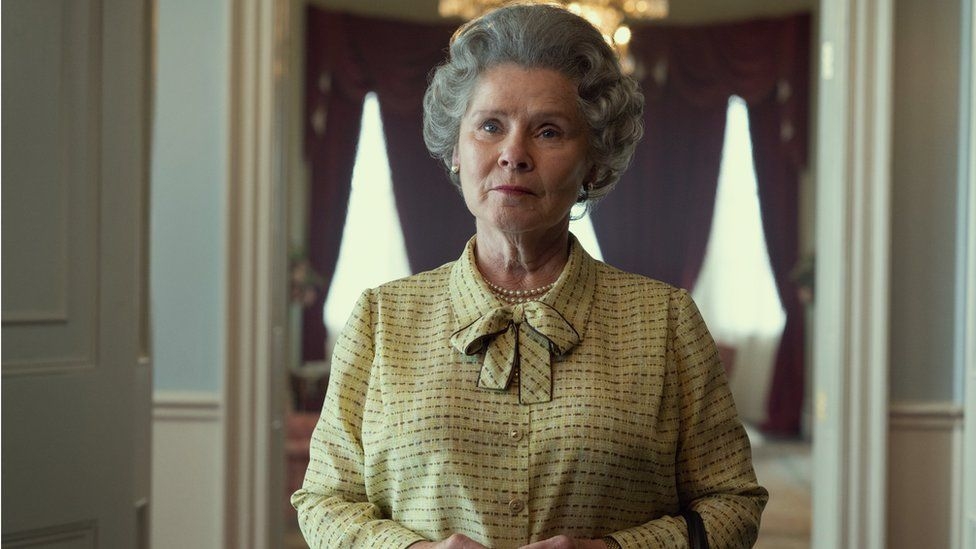 The first image of Imelda Staunton portraying the Queen in the fifth series of The Crown has been released.
Netflix released the picture via their Twitter account, saying it was an "early glimpse" of the new monarch in the royal drama.
Staunton, 65, takes on the role played by Claire Foy and Olivia Colman, as the latest series follows the royal family in the 21st century.
Netflix said the drama's sixth and last series will end in the early 2000s.
Seasons five and six of The Crown are set to encompass the 1990s - a decade that saw the Prince Charles and Diana, Princess of Wales split, the collapse of the Duke of York's marriage to Sarah Ferguson, the Windsor Castle fire, and Princess Diana's death.
Staunton, who starred in Vera Drake and the Harry Potter film series, takes over from Colman, who previously won the best actress award at the Golden Globes for her portrayal of the monarch in series three.
Oscar-nominated actress Lesley Manville will join series five as Princess Margaret - a role previously played by Helena Bonham Carter and Vanessa Kirby.
Jonathan Pryce will take over as the Duke of Edinburgh and Elizabeth Debicki will play Princess Diana, opposite Dominic West as Prince Charles.
Jonny Lee Miller, who rose to fame as a heroin addict in hit 1996 film Trainspotting, will portray the former prime minister Sir John Major.