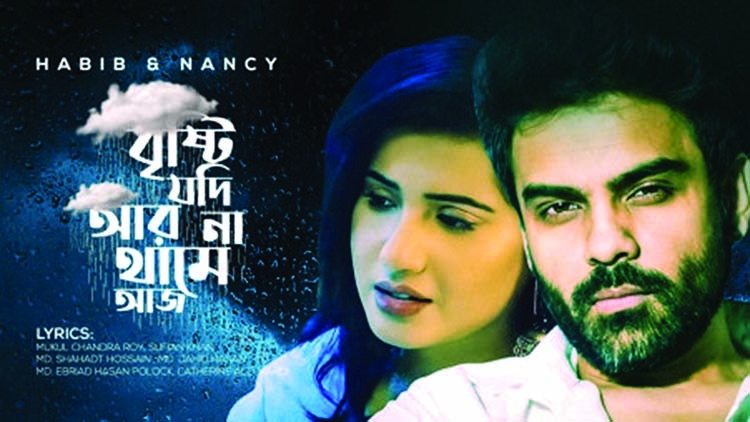 Popular singer-musician Habib Wahid released a brand new song titled "Brishti Jodi Na ThameAj" on Friday, by initiating a unique lyric-hunting venture on social media platform Facebook.
Composed by Habib Wahid, the lyrics of the duet track which also features popular singer NazmunMunira Nancy as Habib's co-vocal, are written by 6 of Habib Wahid's fans who were selected by the singer-composer himself from his official Facebook page, the Unb reports.Uploaded on Habib Wahid's official YouTube channel on Friday, the song has already garnered over 66 thousand views, just within a few hours of its release.
Initially, the project was focused on being a single track, later it was turned into a duet based on the demand of its lyrics, also revealing Nancy as a surprise in this exceptional song project. The announcement happened on Wednesday night during the recording of the song titled "Brishti Jodi Na ThameAj". After recording the song, Habib and Nancy appeared with a video message from Habib Wahid's official Facebook page, sharing the details of the song project.
In the video, Habib said, 'Today I am very excited because I am going to announce a brand new track, that has been a totally new process of composing a song. It was a different experience for me. The biggest thing is that my fans have written the lyrics, picked from their submitted lines in my post on July 5 - and I was really surprised."
"I have never imagined that I would get such good lines from my audience, for the overall lyrics. I would have selected everyone's submitted songlinesIf I could fit them all, but I had to take the writings of a few. The song is going to be an amazing one, now being a duel featuring Nancy."
Praising this unique collaboration, Nancy said, "I think it was a very unique idea. The usual process that we always observe is that a song is written by one or two people, but I have never seen a song that has been written by 6 people - and that too from a social media platform like Facebook."
READ: Scarlett Johansson sues Disney over 'Black Widow' release
"This is a testament that how much Habib Wahid loves his fans and audiences. It is a great honour for me to be a part of such a project," she added.On July 26, Habib announced the names of the selected commenters who have contributed the lines for the song titled "Brishti Jodi Na ThameAj". These lyricists are Mukul Chandra Roy, Sufian Khan, MdShahadtHossain, MdJahidHasan, MdEbriadHasanPolock and Catherine Alo Mardi.
READ: Tashnuva Anan breaks the barrier again with Yamaha Earlier, Habib wrote a status on his Facebook page on July 5 stating "Brishti Jodi ar Na ThameAj". He then offered his fans to complete the song by writing the rest of the lyrics.