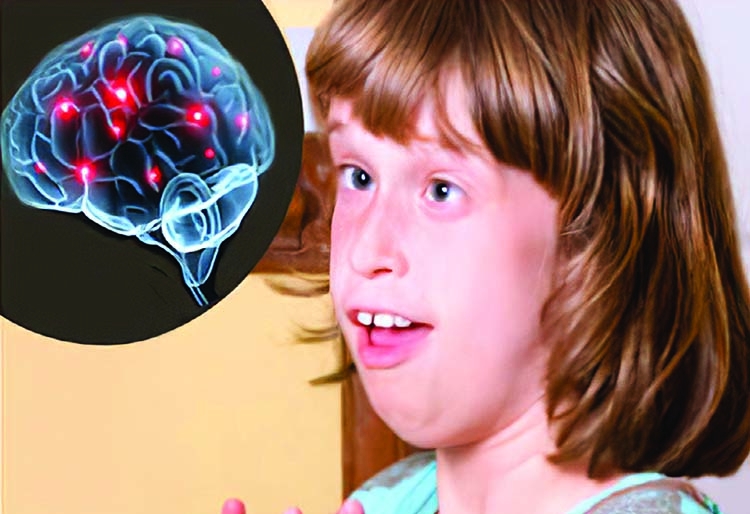 Kamrunnesa Ashraf Dina
Rett syndrome is a rare genetic neurological disorder (neuro developmental) that occurs primarily in girls and more rarely in boys. Rett syndrome is usually recognized in children between 6 to 18 months as they begin to miss developmental milestones or lose abilities they had gained.
At one time it was seen that the child does not respond to calls, he withdraws from all kinds of socially acceptable behaviors, stops talking, has no control over the movement in the body and begins to twist on its own hands - which we find to be similar to the symptoms of a child with autism. And for this reason, many people mistakenly call a child with 'Rett Syndrome' a child with autism. Autism and Rett Syndrome are two different types of developmental disabilities.

The discovery of Rett Syndrome
Rett syndrome was first discovered in 1966 by the Austrian psychiatrist, Andreas Rett. That is why it is called Rett Syndrome according to his name. Until 1983, this problem of girls did not get any recognition at the expert level. Then Dr Bengt Haybery have got such symptoms are possible in 35 children in 1983. According to him, 1 out of every 15,000 girls in Sweden is at risk of contracting the Rett Syndrome disease. However, in 1994, these three causes of child with 'Rett Syndrome' were included in DSM4.

Characteristics of Rett Syndrome:
The degree or severity of the onset of symptoms of 'Rett Syndrome' varies from person to person. The baby develops normally before these symptoms appear. But then his mental and physical abilities began to decline.
1.    Hypotonia or decreased muscle tone is the first thing that comes to mind. Then his control over use of his hand began to wane such as repetitive stereotypic hand movements, including hand washing, wringing, and tapping.
2.     Then his/her speech decreased.
3.     When he/she develops Rett Syndrome in his/her childhood, he/she has difficulty to crawling and walking.
4.     Gradually his/her visual connection with the other began to diminish.
5.     As the activity of the hand power decreases, meaningless oscillation occurs, in some cases this effect may occur suddenly.
6.     Muscle impairment that suddenly attacks the baby and impairs the movement of almost all the organs of the body. It even interferes with speaking.
7.     Initially symptoms of a child with Rett Syndrome behaves like a child with autism, insomnia, walking with gaps in the legs, gnashing of teeth, difficulty in swallowing food, loss of daily intelligence, convulsions and breathing problems.

The trend of Rett Syndrome child development:
To identify a child with Rett Syndrome we need to follow his or her development. We note four trends in the development of a child with Rett Syndrome.
1. Early onset, 2. Rapid Destructive Stage, 3. Placan or Pseudo stationary stage, 4. Iake mator deter ionation stage.
Early onset: It usually occurs between the ages of 6 to 10 months. At this stage, doctors or parents do not catch the problem because their symptoms are very mild at this time. The child's vision decreases and she/he is not interested in toys. His ground muscle development may slow down; As a result he takes much longer to sit or stand. The growth of the head becomes smooth. But because of the age of the child, it is not easy to notice. The duration or duration of this change is short. it can be from 6 months to more than a year.
Rapid Destructive Stage: It usually occurs within 1 to 4 years and the development period can last up to a few weeks to a month. During this time, very quickly or continuously, any special skills of the hand and the ability to speak begin to disappear. Some special hand gestures are made such as holding the fist back or sideways, suddenly touching something and releasing it, etc.
The fist is in the waking state but not in the sleeping state. There are some breathing disorders such as shortness of breath or something similar, but it does not happen while sleeping. Autism is a disorder that is affecting more and more children. It causes rude temperament and insomnia. Walking and limb movement problems are also seen at this time.
Placan or Pseudo stationary stage: It occurs between the ages of 2 to 20. Daily limb movement and convulsions are characteristic of this stage; however, behaviors such as autism and irritability and crying gradually decrease. The person with this problem shows interest in his environment and his communication skills improve somewhat. Many girls remain in this state till the end of their lives.
Late mator deterionation stage: This stage can last from a few years to few decades with limited movement. Muscle weakness or difficulty at this stage is notable symptoms of the problem. The cause of Rate syndrome: Researchers discovered the cause of Rett Syndrome in 1999. Researchers have found that a gene in the X chromosome, called the MECP2 GENE, exacerbates Rett Syndrome due to a lack of function.
This MECP2 gene acts as a control for many of the genes around it. So if it is distorted, it also creates problems in the surrounding genes. As a result, the body and the brain always receive the wrong signals that they cannot properly produce or stop the production of any new proteins, which in turn leads to abnormal gestures and thoughts. About 70 to 80 percent of girls who have Rett Syndrome have been diagnosed with the MECP2 gene.
Another 20-30 percent of girls who do not have this gene are due to the fact that these infected cells in the body cells are dormant, girls are more likely to be infected because they have two X chromosomes in their body cells and due to this, before birth the embryos of son does not fully develop, and abortion soon ends its life cycle. There are special tests to know the presence of Rett Syndrome. It is possible to know it through genetic analysts. It is possible to find out whether a family that has a Rett child has a Rett distortion before the next child is born through MECP2 chromosome analysis.
The management of child with Rett Syndrome: Rett Syndrome is a rare developmental problem. This limitation cannot be completely cured. However, through proper medical education and training, care and management, the affected girls can be given a better life. The most important role for their care and management is played by the parents. Because they have to be taken care of separately. In addition, the combined efforts of parents as well as physicians, therapists, psychologists, special teachers and care takers are especially needed. Written management can be taken to improve their quality of life.
(1)    It is possible to control their various physical problems, increase their breathing control and control their seizures through standard madical care and medication.
(2)    As they have speech and language difficulties and communication gap, speaking and communication skills can be enhanced through the use of speech and language therapy, picture board and visual aids etc.
(3)    Nutrition is very important for them. Many problems can be solved by Good nutrition and diet.
(4)    It is possible to bring the issues of their physical disabilities under control by taking physio therapy.
(5)    In some cases, music therapy and hydrolhury work well.
(6)    When the back is bent, sangary is often needed.
(7)    They have different types of behavior problem, so it is necessary for them to take behavior modification Plan.
(8)    They may need a supportive service, for example, they can be motivated to use to solve various problems by counseling on their own.
(9)    In order to take care of them, it is absolutely necessary to counseling their parents, because the parents have to take the most part to take care of them. It is possible to get good results by reducing the all-pervading faculties of the patients through counseling.
Since the Rett Syndrome disease has not yet been proven to be cured in a holistic or scientific way. So through management, such children will get back their right to life and society will come forward to fulfill their responsibilities.