The Robins are uniting to bring Batman'sson home 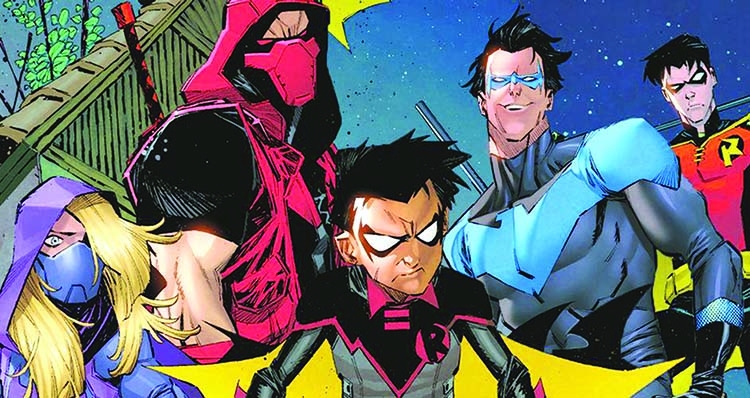 As the world's deadliest tournament is about to begin on Lazarus Island, Damian Wayne has been tracked down by his fellow Robins in an effort to bring him home. In Robin #4, Damian learns more secrets about the League of Lazarus, but as he gains a vital piece of information, Nightwing, Tim Drake, Red Hood, and Spoiler arrive to get him back to Gotham City.
Damian is one of the most recent heroes to become Batman's young sidekick and dawn the mantle of Robin. However, unlike past Robins, Damian is actually Batman and Talia al Ghul's son, making his relationship with the Dark Knight even more complicated. The youngest Robin often craves violence after being raised by Talia and the League of Assassins, which often puts him in direct conflict with his father's ideals. In recent stories, Damian decided to forge his own past, leaving Gotham and ending up as a competitor in the deadly Lazarus Tournament, where young heroes and villains battle it out to the death - with the winner receiving immortality.
In Robin #4 by Joshua Williamson, Jorge Corona, Luis Guerrero, and ALW's Troy Peteri, after reconnecting with Ra's al Ghul and getting a lesson about blocking outside noises, Damian learns the priests and the League of Assassins have a book that's somehow connected to Mother Soul and the secret to immortality on Lazarus Island. As assassins ambush him, Robin dodges them by smartly grappling away. However, when he lands on a rooftop, he's met by four heroes who were all Robin at one point.
Nightwing tells Robin, "It's time you came home, partner," as he's surrounded by Dick Grayson, Jason Todd, Stephanie Brown, and Tim Drake. All of the heroes - who each were Robin before him - clearly care about Damian's wellbeing and making sure he comes home from Lazarus Island in one piece. However, Damian's grudge with his father and the fact he wants to prove himself in the deadly Lazarus Tournament means he won't come with them willingly.
Can the Nightwing and the rest of the Bat-Family convince Damian to leave the island? Don't count on it. Despite the weird going-ons among League of Assassins and those in charge of the Lazarus Tournament, Robin is too prideful just to quit now that the deadly fights are about to begin. Although, having three former Robins (and Tim Drake) by his side could be a huge benefit in figuring out what's really going on in Lazarus Island. See the Robin's reunite in Robin #4, which is in comic book stores now.