92 homeless families to get 'dream homes' in Daudkandi 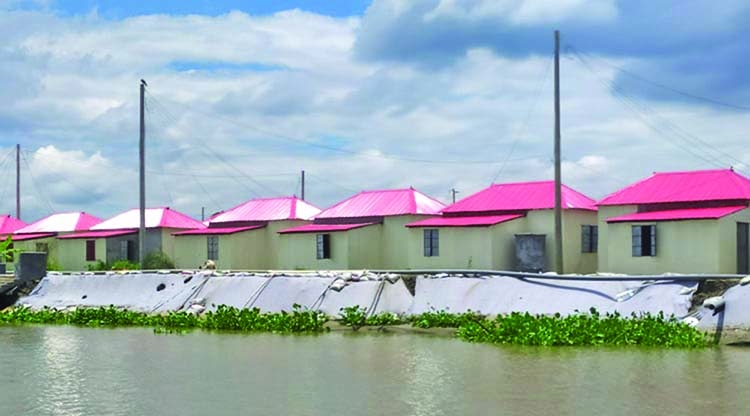 Marking 'Mujib Barsha', some 92 houses are being constructed for homeless at Golaper Char under Daudkandi upazila in Cumilla. -AA
Marking the birth centenary of Father of the Nation Bangabandhu Sheikh Mujibur Rahman, some 92 helpless and homeless families are going to get semi-pucca houses in Daudkandi upazila of Cumilla under the government's Ashrayan Project-2.
It has been seen on the spot that there are 25 houses has built lined up in a secluded and pleasant environment at Golaper Char Guchhgram of Sadar Uttar Union No. 1 of the upazila.
The construction works of the houses has completed using high quality materials, according to correspondent.On the occasion of 'Mujib Barsha' Prime Minister Sheikh Hasina promised not letting anyone remain homeless in the country. Following this, Prime Minister handed over 53,340 more houses to landless and homeless families in June this year under the second phase of Ashrayan Project.
However, Daudkandi Upazila Nirbahi Officer (UNO) Kamrul Islam Khan is working on zero tolerance policy to implement various promises of the Prime Minister in the upazila. Regarding the quality of the new houses, UNO said, "In the first and second phase, a total of 92 houses has constructed for landless and homeless families in the upazila.
Primary schools will be built in Guchhgram to spread education among the beneficiary families and community clinics will be set up for health services, he further said. "Construction work of the houses is almost completed, we have already handed over 20 houses with land documents to the homeless, the work of the remaining houses is also at the final stage, and these houses will be handed over to the homeless in time.
Recently, Food Secretary Dr Mosammat Nazmunara Khanam, Chattogram Divisional Commissioner Md Kamrul Hasan NDC, Cumilla Deputy Commissioner Kamrul Hasan along with me visited all the houses to inspect the quality of construction work. We didn't see any errors anywhere", the UNO added. Haji Md. Al-Amin, a prominent social worker of Golaper Char village, said, "Under the overall supervision of the Upazila Nirbahi Officer, the houses of this Guchhgram have been built very nicely without any errors. I thank the upazila administration for this."
---Liton Sarker Badol in Daudkandi