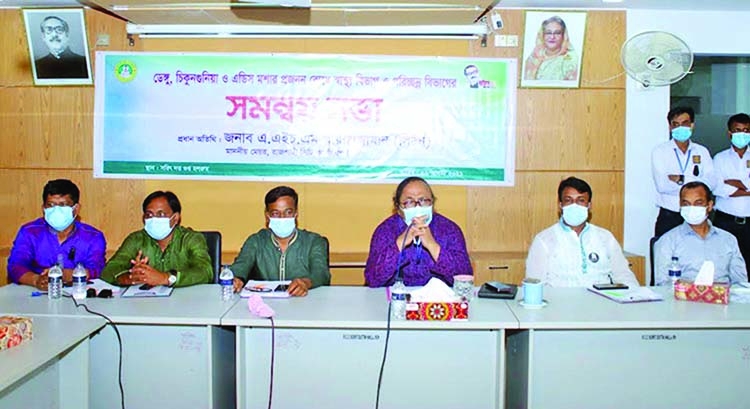 All the authorities concerned, including Rajshahi City Corporation (RCC) and divisional and district administrations, have taken all sorts of precautionary measures including cleaning of all possible breeding grounds of Aedes mosquito to prevent any outbreak of dengue and Chikungunya in the city and its outskirts.
This was revealed at a high-level coordination meeting with all the authorities concerned including public representatives and health officials held on Monday at the conference hall of city Bhaban. Mayor of Rajshahi City Corporation (RCC) AHM Khairuzzaman Liton addressed the meeting as the chief guest with Panel Mayor Shariful Islam Babu in the chair.
Assistant Director of the Divisional Directorate of Health Services Dr Nazma Akhter, RCC Secretary Moshiur Rahman, Chief Health Officer Dr AFM Anzuman Ara Begum and Chief Conservancy Officer Sheikh Mamun, among others, addressed the meeting. The meeting discussed and devised various ways and means on how to free the region from dengue and Chikungunya infection.Mayor Liton apprised the meeting that the city corporation health workers and others concerned are making people aware of dengue fever going to their doorsteps. He also urged the citizens to become more cautious to protect themselves from the dengue infection.
The city corporation has launched a hectic mosquito control and cleanliness drive at its various places aiming at making it free from the dengue infection. In the drive, all possible mosquito breeding places such as drains, bushes and landfills of mosquitoes are being destroyed. Liton said the city corporation is conducting special crush programs for mosquito control and cleanliness. In phases, all the major installations and institutions will be brought under the program.