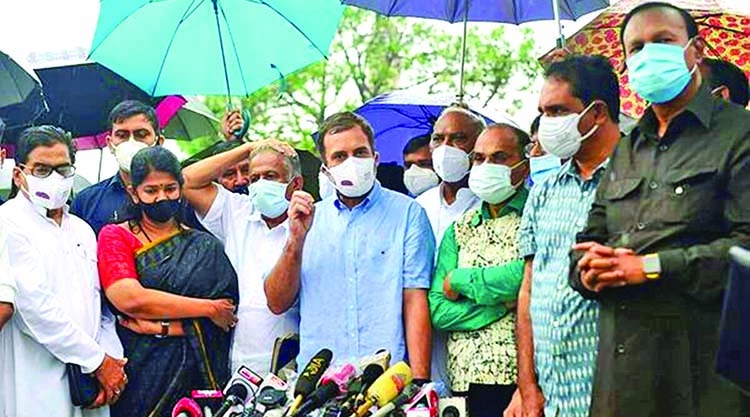 India's Congress party leader Rahul Gandhi has invited leaders of Opposition parties to a breakfast meeting at the Constitution Club in Delhi on Tuesday to chalk out a joint strategy on the Pegasus snooping issue. This comes at a time when the Opposition has been demanding a discussion in Parliament on the Pegasus row and its leaders have been giving adjournment notices every day, The Indian Express reports.While the Opposition has been insisting on a full-fledged debate on the Pegasus spyware issue, the government's stand has been that it is ready to discuss anything but that.
The meeting is being held to forge unity among the opposition ranks on the issue. All opposition MPs and floor leaders of various parties have been invited, including the Trinamool Congress which has been skipping all meetings convened by Rahul Gandhi so far.Asserting that "the voice of the Opposition is being suppressed in Parliament", Gandhi had earlier accused Prime Minister Narendra Modi and Home Minister Amit Shah of tarnishing India's democracy by "using Pegasus against India, its institutions".
Speaking to reporters following a meeting with the floor leaders of Opposition parties last Wednesday, Gandhi said the Opposition has only one question: whether the government of India had bought Israeli spyware Pegasus to use it as a "weapon against its own people".
Gandhi also questioned why the issue cannot be discussed in the House. He stressed that the Opposition is not disturbing Parliament proceedings by raising the issue but "only fulfilling our responsibility."With the Pegasus row disrupting Parliament for days on end, sources had told The Indian Express on Friday that the government is "seriously considering the curtailment of the Monsoon Session".
"The government is ready to discuss every people-related issue in Parliament, but the Opposition does not want that. It's a complete waste of money and time," a minister said. He added that the "looming Covid threat… with many areas reporting cases" would also be a factor if the government decides to wind up the session.The Supreme Court will take up on August 5 petitions seeking an independent probe into allegations of surveillance using the Pegasus software made by Israeli cybersecurity firm NSO Group.
The petitions have been listed before a bench of Chief Justice N V Ramana and Justice Surya Kant.There are three petitions before the court in the matter, one filed by senior journalists N Ram and Shashi Kumar, another by advocate M L Sharma, and a third one by CPI(M) Rajya Sabha MP John Brittas.