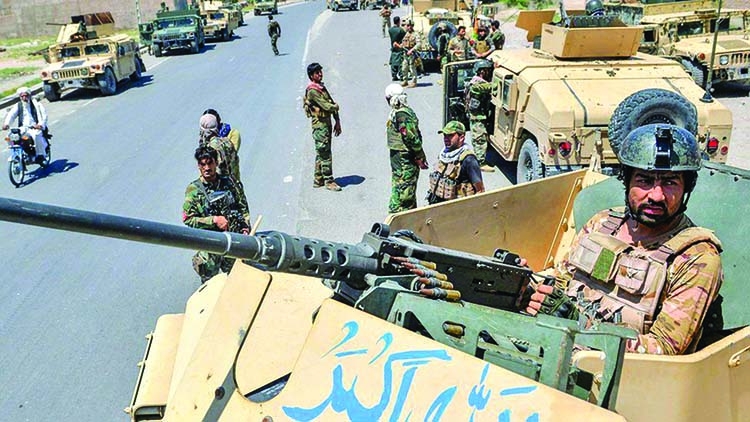 Afghan government forces are battling the Taliban in three key cities. -Getty
Ferocious fighting is taking place in a major Afghan city, amid fears it could be the first provincial capital to fall to the Taliban. Lashkar Gah in southern Helmand province is under heavy assault from the militants, despite US and Afghan air strikes. The Taliban are said to have seized a TV station. Thousands of people fleeing rural areas took shelter in buildings. The UK and US say the Taliban may have committed war crimes.Hundreds of Afghan reinforcements have been deployed to battle the militants. The Taliban have made rapid advances in recent months as US forces have withdrawn after 20 years of military operations in the country.
Helmand was the centrepiece of the US and British military campaign, and Taliban gains there would be a blow for the Afghan government.If Lashkar Gah fell, it would be the first provincial capital won by the Taliban since 2016. It is one of three capitals under attack.Attempts by the militants to capture Kandahar, Afghanistan's second-largest city, have continued after rocket strikes hit its airport on Sunday.
Seizing control of Kandahar would be a hugely symbolic victory for the Taliban, giving them a grip on the south of the country.In a third besieged city, Herat, in the west, government commandos are battling the insurgents after days of fierce fighting. Government forces have taken back some areas after a UN compound was attacked on Friday.
As government forces struggled to contain Taliban advances, President Ashraf Ghani blamed the sudden withdrawal of US troops for the increase in fighting."The reason for our current situation is that the decision was taken abruptly," Ghani told parliament.Mr Ghani said he had warned Washington that the withdrawal would have "consequences".
Although nearly all its military forces have left, the US has continued its air offensive in support of government troops.President Biden's administration announced on Monday that because of the increase in violence, it would take in thousands more Afghan refugees who worked with US forces.
The US and UK have accused the Taliban of "massacring civilians" in a town they recently captured near the Pakistan border.Gruesome videos that emerged from Spin Boldak apparently showed revenge killings. The Taliban have rejected the accusations."The Taliban's leadership must be held responsible for the crimes of their fighters," the US embassy in Kabul tweeted."If you cannot control your fighters now, you have no business in governance later."
---BBC