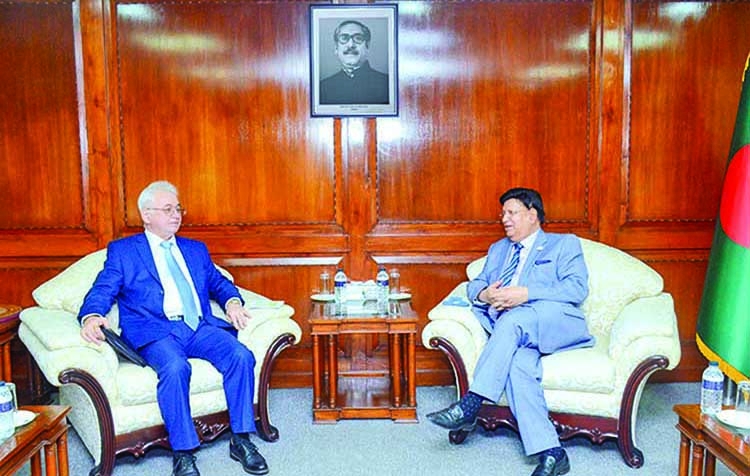 Newly appointed Russian ambassador to Bangladesh Alexander Vikentyevich Mantytskiy calls on Foreign Minister A K Abdul Momen at his ministry office on Sunday. -Agency
Foreign Minister A K Abdul Momen has sought Russian support in repatriation of Myanmar's Rohingyas. He made the urge while newly appointed Russian ambassador in Dhaka Alexander Vikentyevich Mantytskiy called on him at his ministry office on Sunday.
The Foreign Minister expected that his Russian counterpart would visit Bangladesh to attend the inauguration of Rooppur Nuclear Power Plant in 2023. As the Russian ambassador proposed to celebrate 50-year diplomatic ties between Bangladesh and Russia together, Momen said that the two countries could chalk out the joint programme marking the milestone.
The Foreign Minister termed Bangladesh-Russia ties as a special one and said the countrymen recalled the Russian support during the country's great liberation war as well as its rebuilding efforts after the war. He recalled Father of the Nation Bangabandhu Sheikh Mujibu Rahman had visited Russia in March of 1972, just after the independence of the country, to express his gratitude to the Russian government and its people for their support during the Liberation War of Bangladesh.