'I look up to Bengali people for justice' 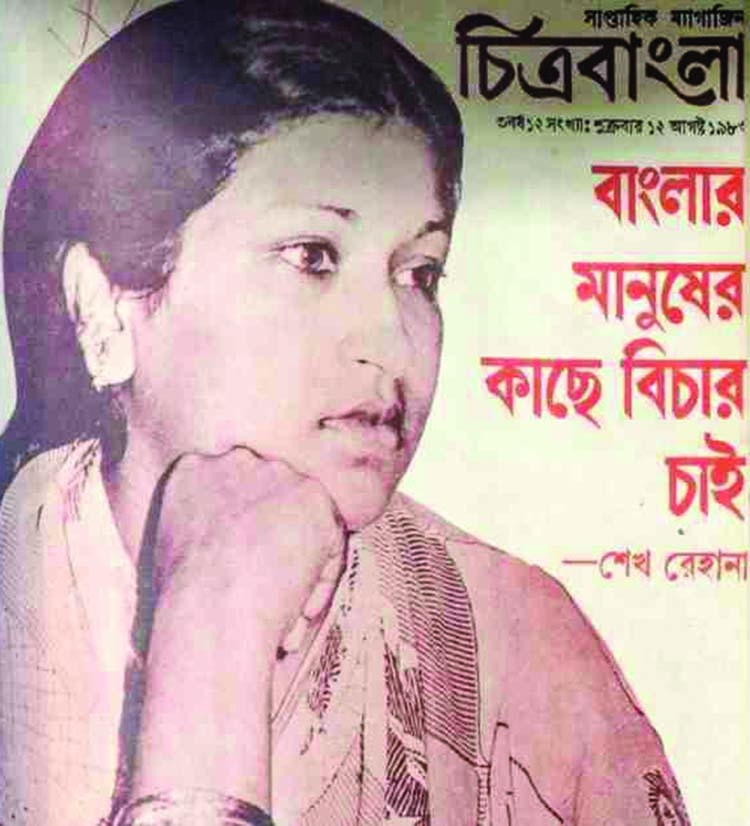 Sheikh Rehana, daughter of Father of the Nation Bangabandhu Sheikh Mujibur Rahman, had demanded justice from the people of Bangladesh for the assassination of almost every one of her family -- her father, mother and brothers.
"I demand justice from the people of Bangla," Rehana said in a rare interview published in Chitra Bangla in 1983. Bangladesh Awami League shared the interview on its verified Facebook page on Monday marking her birthday in which she expressed all her grief that she had harbored since the assassination of her family members.
The interview has time-traveled to the page of the ruling Awami League on her 67th birthday at a time when the political landscape is entirely different from that in 1983 as her sister, Sheikh Hasina, later reclaimed her space in the country and became the Prime Minister. On her birthday, Sheikh Rehana received a plethora of wishes on social media. "I wish they had taken my life on August 15. I have lost my father, my mother, my brother. What am I alive for? What was the fault of Russel? He didn't do politics. My mother didn't do politics. Why did they murder them? Let God not give anyone so
severe a punishment. I'm an orphan. I'm helpless. As a daughter, as a Bangali, I demand justice for the killing of Bangabandhu," she said in the interview 38 years ago.
"Imperialist forces had their hands behind the assassination of Bangabandhu. Local agents were involved too - a serpent under the flower. The voices that should have come loud among the country's leaders demanding the merciless killing of Bangabandhu are not as strong as expected," added Rehana, adorably called Choto Apa (the youngest among elder sisters).
When the entire nation celebrated the 100th birth anniversary of the architect of independence, Bangabandhu, last year, there was a diametrically opposite scenario prevalent in the country following his assassination in 1975.
The killers who proudly declared their deed were offered indemnity and a hush fell on the chapter of history gloriously led by the Father of the Nation. Bangabandhu's daughters --Sheikh Hasina and Sheikh Rehana -- had to agonizingly wait for six years to force their way back to the country in 1981.
In the interview, Rehana also mentioned that she had sent a letter to Bangabandhu and Russel on August 14, after reaching Germany to meet her sister, Sheikh Hasina.
In the letter, Rehana described they had travelled and how they were spending their days over there. But, Bangabandhu and nearly his entire family were gunned down on August 15, when the letter was on the way.
Her 10-year-old brother, Russel, used to be reluctant about taking food and rest properly.
In her letter, Rehana urged her brother to take care of his health and narrated how exquisite Germany's natural scenario was.
She also attached a couple of view cards to the letter. But, did those reach Russel's hands?
The interview was published in the weekly magazine Chitra Bangla on August 12, 1983.