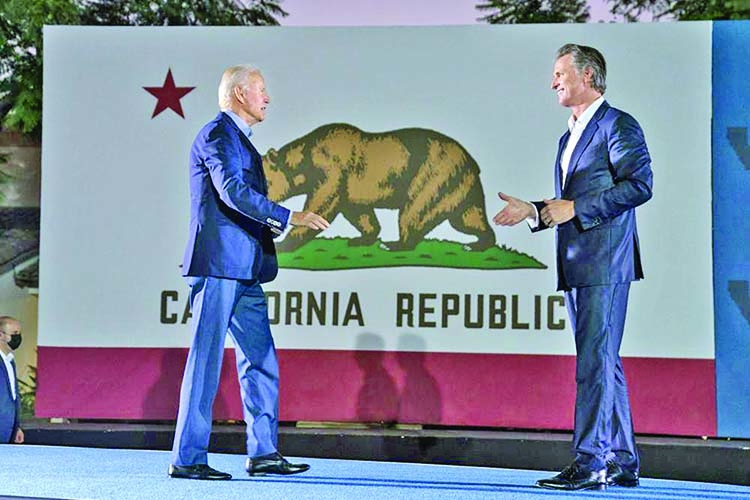 President Joe Biden arrives at a get out the vote rally for Gov. Gavin Newsom, D-Calif., at Long Beach City College, Monday, Sept. 13, 2021, in Long Beach, Calif., as Newsom faces a recall election on Tuesday. -AP
California Democratic Gov. Gavin Newsom ended his campaign to retain his job in a recall election with a final push from President Joe Biden, who warned that the outcome of the contest could shape the country's direction on the pandemic, reproductive rights and the battle to slow climate change.
The Democrat who defeated Republican President Donald Trump less than a year ago said that the issues that defined the 2020 race had been resurrected in California, with potentially disastrous results if Newsom is removed in the election that ends Tuesday. Speaking to hundreds of cheering supporters during a twilight rally in the coastal city of Long Beach, south of Los Angeles, Biden referred to the leading Republican candidate Larry Elder as "the clone of Donald Trump." "Can you imagine him being governor of this state?" Biden asked, as the crowd responded with shouts of "No, no!" "You can't let that happen. There is too much at stake," the Democratic president said.
"The eyes of the nation are on California," he warned. The recall vote is "going to reverberate around the nation and ... around the world." The results of the race in which Newsom needs a majority vote to hold his job are likely to influence the 2022 midterms, when control of Congress again will be in play and the party that controls the White House historically loses seats. They could determine how prominently Democrats campaign on COVID-19 restrictions that many Republicans have decried as unnecessary and overly burdensome. With much riding on the outcome, Biden was last among a prominent list of Democrats to make cameo appearances in the contest either in person or in ads, including Vice President Kamala Harris, Vermont Sen. Bernie Sanders, former President Barack Obama and Massachusetts Sen. Elizabeth Warren.
--- AP, Long Beach, Calif