Khas land worth Tk 3cr recovered from grabbers in Daudkandi 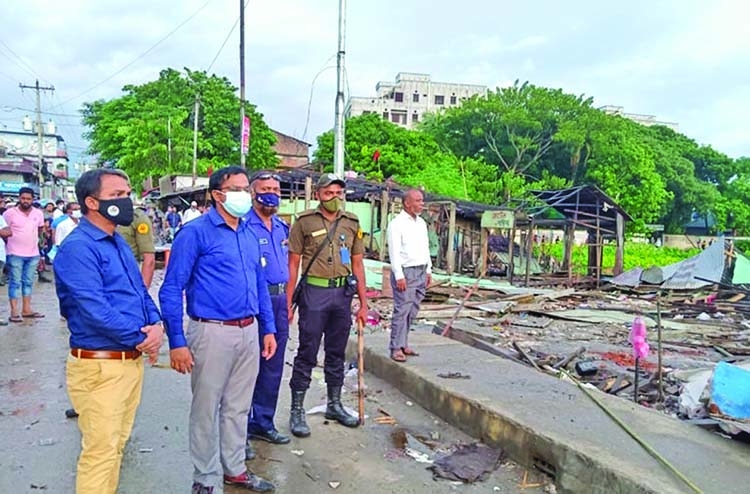 Daudkandi upazila administration in an eviction drive recovered khas land worth Tk 3 crore from illegal grabbers at Daudkandi municipal market on Monday (September 13) noon.
Under the directive of Daudkandi Upazila Nirbahi Officer (UNO) Md Kamrul Islam Khan, Assistant Commissioner (land) and Executive Magistrate Sukanta Saha conducted the eviction drive. Amit Datta, Assistant Commissioner of Deputy Commissioner's office, Cumilla, was present while conducting the drive. During the drive, a total of 17 illegal shops were evicted from both sides of the main road of Daudkandi Bazar and raised red flags. Earlier, gas and electricity connections were cut off before the eviction.
It is learned that the grabbers were doing business here for a long time on lease from zila parishad. A case was going on between the district administration and the zilla parishad for a long time over the possession of the land.
In this regard, UNO Md Kamrul Islam Khan said, "The evicted grabbers were doing businesses here for a long time on lease from the zila parishad. The recovered land was actually recorded in the name of the district administration, so the eviction drive was carried out by the upazila administration on the instructions of the district administration by canceling the lease of the grabbers given by zila parishad."
"We have a plan to build a multi-storey commercial building in the evicted land. The shops of the building will be given rent on lease. Our main goal is to provide employment to many people by allocating shops," the UNO added. Among others, Daudkandi Model Thana Police Inspector (Investigation) Shafiul Alam and police personnel, members from Ansar and Fire Services were present during the drive.
--- Liton Sarker Badol in Daudkandi