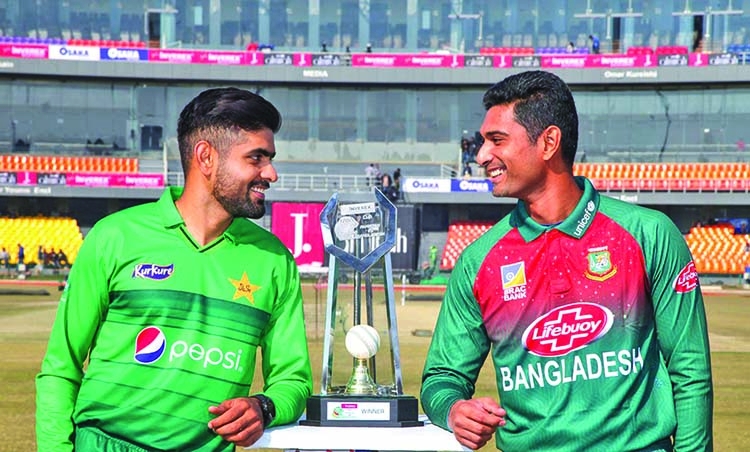 Bangladesh's T20 skipper Mahmudullah Riyad with Pakistan captain Babar Azam. -Twitter
Pakistan will visit Bangladesh after five years for a tour, comprising Test and T20 series. The series which will be held in November-December this year will include three Twenty20 Internationals and two Test matches of the ICC World Test Championship, The Bangladesh Cricket Board (BCB) said. The Pakistan team is returning to Bangladesh for the first time since the ACC Asia Cup T20 in 2016. The visitors will start the tour with the T20 series with all matches taking place at the Sher-e-Bangla National Cricket Stadium in Mirpur, Dhaka.
The first T20 will be held on November 19, while the rest of the two matches are slated for November 20 and 22. The first Test will be held on November 26-30 at the Zahur Ahmed Chowdhury Stadium in Chattogram with the teams returning to Dhaka for the second Test, scheduled from December 4-8.
The Test series will mark the beginning of Bangladesh's campaign in the ICC WTC cycle 2. In Test cricket, Bangladesh still remains win-less against Pakistan as they played 11 matches, losing 10 and drawing one, courtesy to rain.
In T20 cricket, however, Bangladesh won two after playing 12 matches. Their ODI result however looks much better as they won five matches in 37 encounters with a 3-0 win over them at home in 2015.
Fixtures
November 19: First T20I, Dhaka
November 20: Second T20I, Dhaka
November 22: Third T20I, Dhaka
November 26-30: First Test, Chattogram
December 4-8: Second Test, Dhaka