'BNP always looks for back door' 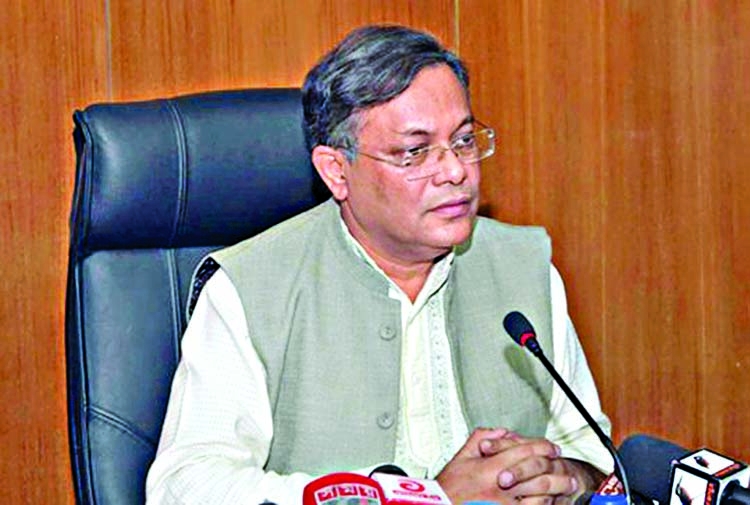 Information and Broadcasting Minister Dr Hasan Mahmud on Tuesday said BNP's aim is not to join elections, in fact their (BNP) intentions are to do something from back door by creating instability in the country. "BNP was born through back door. And for this, they always search for back door," he told newsmen at Awami League president political office in city's Dhanmondi.
The minister said BNP had tried to foil the 2014's elections. Even, they torched about 500 voting centers and killed people including polling officers, he added, reports BSS.
Hasan said they (BNP), at first, boycotted the elections of 2018. But, later, they joined the polls (2018), he added. Replying to a query on investigations into bank accounts of 11 journalists' leaders, the minister said, "I saw the news in the media. The government can seek it. But, I will look into the matter why it was done."
Replying to another query about the cancellation of the declaration of 10 daily newspapers, he said about 400 newspapers are not published regularly. Many of those (newspapers) were not submitted to the Department of Films and Publications (DFP) during the last two years, said Hasan, also Awami League joint general secretary. He said many newspapers were published when they got ads. The concerned authorities have published only a few copies and they distributed those at the information ministry and some other important ministries, he added.
Earlier, the minister virtually joined a discussion organised by the Indian High Commission to Dhaka in the memory of Master Da Surya Sen and Pritilata Waddedar.
Paying rich tribute to Master Da Surya Sen, Pritilata Waddedar and others associates, Hasan said their patriotism encouraged him from his childhood.
Asaduzzaman Noor, MP, eminent writer Selina Hossain, Chattogram University Vice Chancellor Professor Dr Shirin Akther, film producer Pradip Ghose and Youth Opportunity co-founder Dr Osama Bin Nur, among others, took part in the discussion with Indian High Commissioner to Bangladesh Vikram Doraiswami in the chair.
Indira Gandhi Cultural Center director Dr Nipa Chowdhury conducted it.
Later, Hasan joined a meeting with the leaders of AL Pabna district unit at the office.
AL Organising Secretary SM Kamal, AL Pabna district unit president Rezaur Rahim Lal and general secretary Golam Faruque Prince, MP, among others, addressed the meeting with AL Presidium Member Abdur Rahman in the chair.