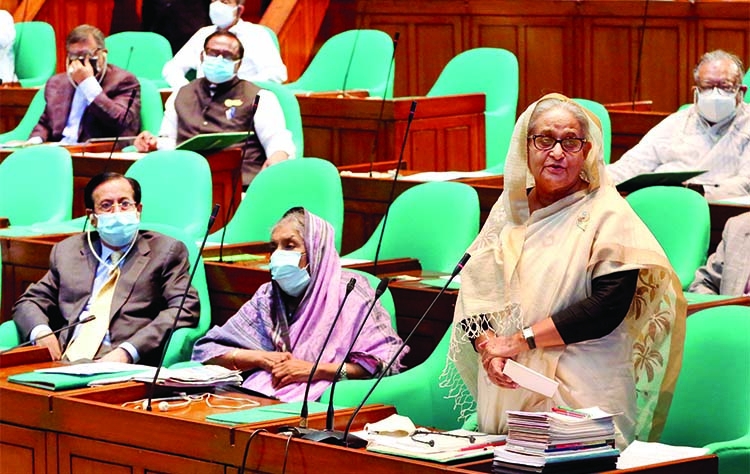 Prime Minister Sheikh Hasina addresses the Jatiya Sangsad on Tuesday on an obituary motion at the death of Jatiya Party lawmaker Prof Masuda M Rashid Chowdhury. -Agency
Prime Minister Sheikh Hasina once again called upon the people of countrymen to follow the health guidelines properly as she joined a discussion on an obituary motion in the parliament.
She said, ''It is truly a matter of shock that we have lost so many lawmakers of the parliament. We don't want to take any such condolence motion." Marking the obituary reference at the death of Jatiya Party lawmaker from the reserved seat for women Prof Masuda M Rashid Chowdhury, the Premier said, "Two lawmakers passed away at the first two consecutive days of this parliament session and today another parliamentarian died". Masuda Rashid passed away early on Monday while undergoing treatment at Birdem hospital in the capital. The premier goes on to say, "All including the people who received vaccines will have to follow the health guidelines properly particularly during the period of Coronavirus pandemic."
The Leader of the House said, "Masuda M Rashid Chowdhury could have contributed more to the society if she had been alive. Her death is a great loss to the society. She was a political leader, social
worker, women entrepreneur, artist, a university teacher and a knowledgeable person.'' "Her multifaceted talent will inspire our womenfolk alongside giving them strength and courage to go ahead," she continued.
The head of the government prayed for eternal peace of the departed soul and conveyed deep sympathy to the bereaved family and also wished good health of everyone staying at home and abroad. A one-minute silence was observed at the parliament to show respect to the deceased lawmaker. A prayer was held seeking eternal peace of the departed soul.