Investigate how many people Zia killed in jail 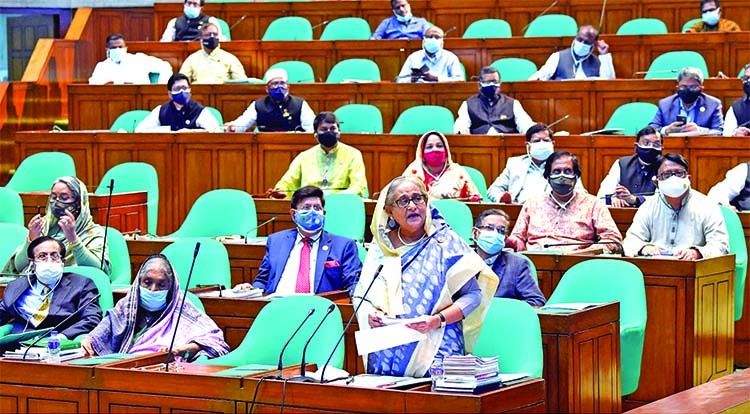 Prime Minister Sheikh Hasina delivers her valedictory speech at the 14th session of the 11th Jatiya Sangsad on Thursday. -PID
Prime Minister Sheikh Hasina on Thursday urged lawmakers to find out how many people were killed in each jail across the country during Ziaur Rahman's regime.
"You (MPs) should move forward to find out how many people were killed in jails, especially in Dhaka, Bogura, Rajshahi, Khulna, and Cumilla. Hundreds of people were hanged to death in each coup . . .," she said.
The Leader of the House passed this call during her valedictory speech at the 14th session of the 11th Jatiya Sangsad.
Speaker Dr Shirin Sharmin Chaudhury chaired the sitting.
"Army officers, army soldiers, air force's 562 officers as well as soldiers and a number of people were killed . . . still there may be many people who become mentally imbalanced due to executing the order of hanging people each night," she said. Sheikh Hasina said Zia and his allies had accommodated killers, terrorists, militants, war criminals, rapists . . . but the irony is that the issues of human rights, knowledge and rule of law have to be heard from them.
Mentioning that Zia introduced so-called multi-party democracy through "yes" or "no" vote in the election of 1977, she said "Actually, Zia destroyed elections and demolished people's trust on the vote." She also referred to the election of 1979 in Zia's regime where he showed how to manipulate elections and vote. She continued that in addition, he (Zia) initiated the culture of not repaying a loans taken from a bank. "He (Zia) made people corrupt giving handing money and arms over to the meritorious students and established the politics of arms in educational institutions in the country," she added.
Reiterating that Zia was involved in the assassination of Father of the Nation Bangabandhu Sheikh Mujibur Rahman in 1975, the Prime Minister said there was no doubt that he was involved in the killing. "I wanted to accuse him. At that time, the Home Secretary was Rezaul Hayat and told me that dead people cannot be accused. But, I think the name should have been (mentioned as accused)."
Those, who helped occupying forces to commit arson attacks, murder and rape in this country, had been made ministers and advisors during the regime of Zia, the premier said, adding "He also rewarded the killers of Fathers of the Nation providing jobs in various embassies."
She continued saying that his wife Begum Khaleda Zia also made Colonel Rashid and Huda Members of Parliament and this is their character.
Referring to the issue of Zia's grave which is situated inside the parliament area, she said Farooq-Rashid himself in an interview with BBC confessed that Zia was involved in the conspiracy, which was also in the books of Anthony Mascarenhas and in the book of Lawrence Lifschult, hence the matter of Zia's involvement in the killing cannot be denied.
Premier said Zia's body was not found after the news of his death and that was why namaj-e-janaza was held in absentia, but a few days later a box was brought.
Pointing out to General Ershad, she said it was done on someone's advice and consequently, a box was arranged and displayed.
"Then the question came again and again in this Parliament that if the body was found, then why there was no picture of the body?" she said.
The Premier said Mir Shawkat (Mir Shawkat Ali Bir Uttam) identified the body. She told the Parliament that one day she asked him (Shawkat) to speak honestly about the body because she knew him as a freedom fighter, but he replied "where to find the body".
Sheikh Hasina said she even repeatedly asked General Ershad where did he find the body in the box, but he also replied that "Sister, where can I get the body?"
"So we've repeatedly asked what is being raised today and you (BNP leaders and activists) can see what the then BNP leaders had done," she said.
--- BSS