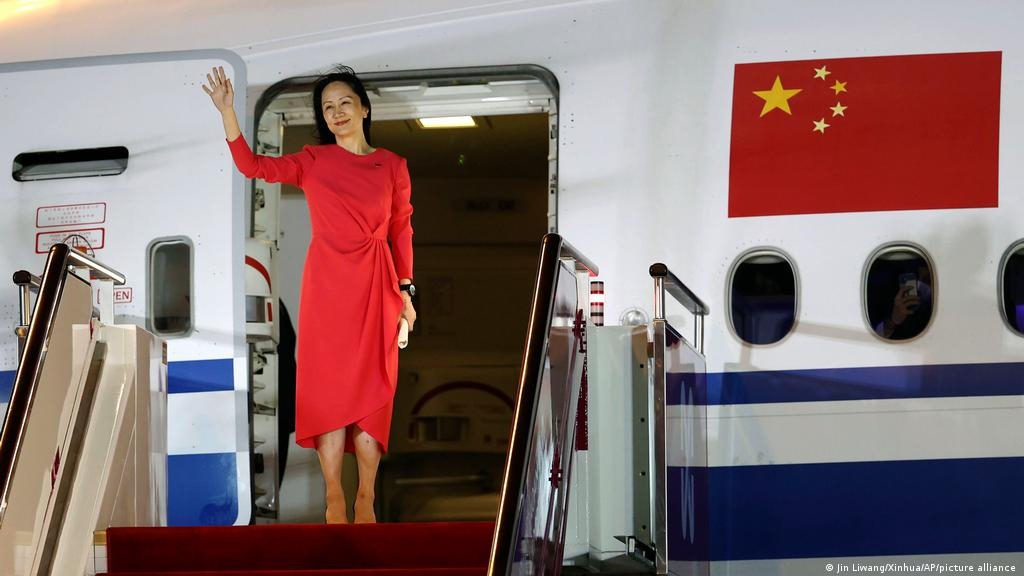 A Chinese tech executive released after being detained in Canada for nearly three years has returned home.
Huawei's Meng Wanzhou flew to Shenzhen on Saturday evening, hours after two Canadians freed by China had gone back.
In 2018 China accused Michael Spavor and Michael Kovrig of espionage, denying detaining them was in retaliation for Ms Meng's arrest.
The apparent swap brings to an end a damaging diplomatic row between Beijing and the West.
Mr Spavor and Mr Kovrig arrived in the western city of Calgary just before 06:00 local time (12:00 GMT) and were met by Prime Minister Justin Trudeau.
A couple of hours later Ms Meng touched down in Shenzhen, China, to applauds from a crowd gathered at the airport.
"I'm finally back home!," said Ms Meng, according to the Global Times, a Chinese tabloid backed by the ruling Communist Party.
"Where there is a Chinese flag, there is a beacon of faith," she added. "If faith has a color, it must be China red."
Ms Meng was wanted on charges in the US but was released after a deal between Canada and US prosecutors.
Before her release, Ms Meng admitted misleading US investigators about Huawei's business dealings in Iran.
She spent three years under house arrest in Canada while fighting extradition to the United States.
China had earlier insisted that her case was not related to the sudden arrest of Mr Kovrig and Mr Spavor in 2018. But China's the decision to free them after Ms Meng's release appears to show that pretence has been abandoned, reports Robin Brant, the BBC's Shanghai correspondent.
Mr Kovrig and Mr Spavor have maintained their innocence throughout, and critics have accused China of using them as political bargaining chips.
After they arrived in Calgary, Canadian Prime Minister Justin Trudeau shared images on Twitter of him welcoming the pair.
"You've shown incredible strength, resilience, and perseverance," he wrote in the tweet. "Know that Canadians across the country will continue to be here for you, just as they have been."
Mr Kovrig is a former diplomat employed by International Crisis Group, a Brussels-based think tank.
Mr Spavor is a founding member of an organisation that facilitates international business and cultural ties with North Korea.
In August this year a Chinese court sentenced Mr Spavor to 11 years in prison for espionage. There had been no decision in Mr Kovrig's case.
On Friday, a Canadian judge ordered the release of Ms Meng, Huawei's chief financial officer, after she reached a deal with US prosecutors over fraud charges against her.
Huawei said in a statement that it would continue to defend itself in court, and looked forward to seeing Ms Meng reunited with her family.
Before her arrest, US prosecutors accused Ms Meng of fraud, alleging that she misled banks into processing transactions for Huawei that broke US sanctions against Iran.
As part of a deferred prosecution agreement, Ms Meng admitted to misleading HSBC about Huawei's relationship with Skycom, a Hong-Kong based company that operated in Iran.
China's foreign ministry said the charges against her had been "fabricated" to suppress the country's high-tech industries, according to state media.
But in a statement the US justice department insisted it would continue to prepare for trial against Huawei, which is still on a trade blacklist.
Ms Meng is the elder daughter of Mr Zhengfei, who set up Huawei in 1987. He also served in the Chinese army for nine years, until 1983, and is a member of the Chinese Communist Party.
Huawei itself is now the largest telecom equipment maker in the world. It has faced accusations that Chinese authorities could use its equipment for espionage - allegations it denies.
In 2019, the US imposed sanctions on Huawei and placed it on an export blacklist, cutting it off from key technologies.
The UK, Sweden, Australia and Japan have also banned Huawei, while other countries including France and India have adopted measures stopping short of an outright ban.