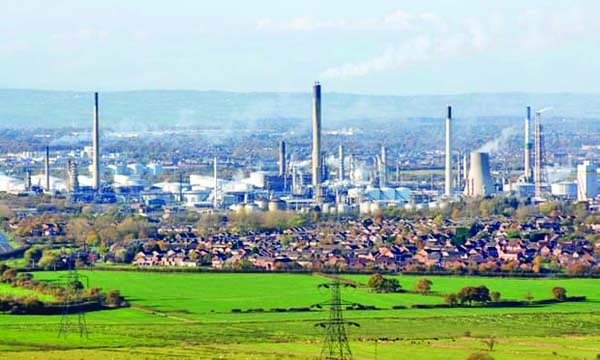 The UK's second biggest oil refinery is locked in crisis talks with tax officials over a deferred tax bill, amid reports it could be on the brink of collapse.Essar Energy, which owns the Stanlow oil refinery in Ellesmere Port, Cheshire, is negotiating with HM Revenue and Customs (HMRC) over a £223m VAT payment, delayed because of the pandemic.The Stanlow oil refinery supplies about a sixth of Britain's road fuel, and is owned by billionaire brothers Shashi and Ravi Ruia, through their company Essar Oil UK.
It's midday at the Corinthia Hotel in London and I'm sitting on a bench in a corridor waiting to talk to Daniel Craig. The main entrance doors are open for ventilation. Pre-pandemic there would have been a lot of security, this is Bond after all, but in the age of coronavirus the hotel is like a socially distanced Fort Knox.There's a doctor on standby and before I'm allowed in the same room as 007, I've had to pass a temperature check - and that isn't all.To get into the hotel itself I've had to show the results of a negative PCR test taken within the last 48 hours, prove I'd done a lateral flow test this morning AND sign paperwork promising I'm not secretly trying to give everyone at the press junket COVID.
Former President Trump returned to Georgia this weekend, to amplify his attacks on the key battleground state's top elected Republican leaders and to showcase a trio of candidates loyal to the former president.For Trump, the trip to Georgia was personal - it came as he's still trying to overturn his razor thin defeat to now-President Biden in Georgia, more than 10 months after losing the White House in the 2020 election. And Trump used his rally at the Georgia National Fairgrounds in Perry, in the central part of the state, to target conservative Gov.
The House speaker, Nancy Pelosi, said on Sunday Democrats will pass a $1tn bipartisan infrastructure bill this week.She also said she would work to build consensus on Joe Biden's separate $3.5tn social spending agenda, which has caused divisions within the Democratic party."Let me just say that we're going to pass the [infrastructure] bill this week," Pelosi told ABC's This Week. "I'm never bringing a bill to the floor that doesn't have the votes. "The infrastructure deal has been placed in jeopardy by a split between moderate and progressive Democrats over the $3.5tn spending plan, which addresses party priorities including healthcare, childcare and the climate crisis. Moderates want the infrastructure bill passed first. Progressives want to tie the bills together.