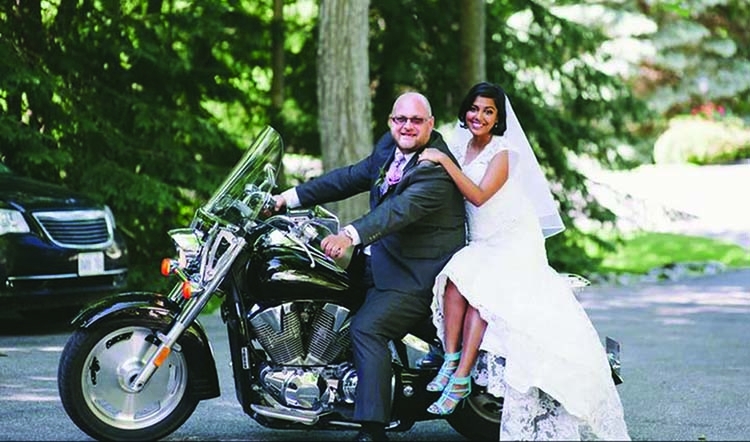 "After being with my ex-husband for four years, I realized how loveless our marriage was. Although it ended in divorce, it taught me what I really needed in a life partner. I was away from home, and going out to clubs to meet people wasn't my idea of finding a life partner. So a year later, I joined OkCupid to find someone I could really connect with. I met a few men on the app, but no one matched up to Boris. He was a divorcee too; we understood each other. And even though we belonged to two different countries and cultures, our values were similar.
And a week into texting, Boris asked me out to a concert, 'Bruno Mars is performing, let's go?' I didn't even know who Bruno Mars was, but I agreed! We hit it off; I have so many memories from the concert, but my favorite one is holding hands the entire evening.
By the second date, Boris knew that I'm the one for him, and it showed! He was always so happy to drive down to see me after work and to introduce me to all his friends! I had a lot of anxieties because of my past, and I gave Boris a lot of trouble, but he was just so understanding. He respected my work and my career too. Slowly, my heart opened to his love.
We went on a few exciting dates; Boris is a scuba diving champ, and his zeal for life was infectious. So when he asked me to go diving with him, I couldn't say no. And soon, we were exploring the reefs in the South China Sea! Right after our first dive together, he blurted out, 'I love you!'
Soon after that, we travelled to Germany together to meet his family. With each passing day, we grew inseparable. Marriage wasn't our priority, but six months later, he had to move countries for work-I decided to move with him. A month before flying out, we threw a farewell party for our friend's back home. Little did I know, he'd planned a surprise proposal for me! As we were dancing, he went down on his knees, pulled out a ring and said, 'Marry me?' With tears in my eyes, I told him, 'You're too good to be true!' and he said, 'You deserve it!' After that, he bonded with my parents when they came down to visit us.     Humans of Bombay, Fb