We are able to resist militancy: PM 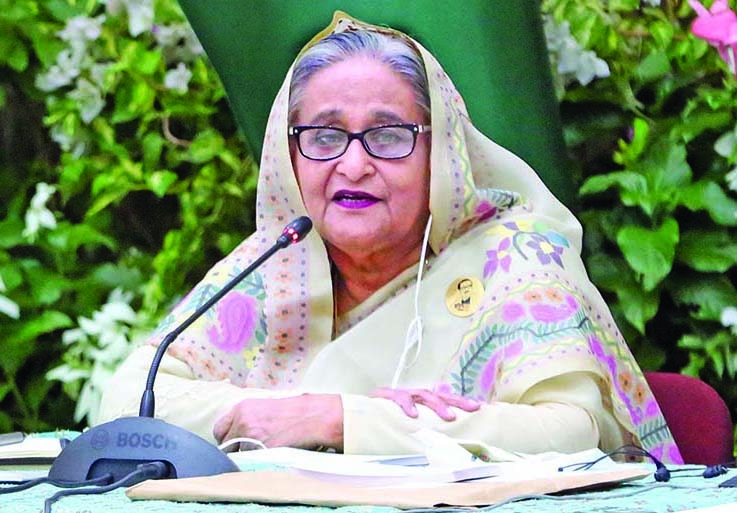 Prime Minister Sheikh Hasina has said that Bangladesh is able to control and resist militancy. She laid emphasis on making people more aware of the detrimental effect of militancy and radicalism. People of all spheres of life will have to be united against militancy, Sheikh Hasina added.
Sheikh Hasina came up with these remarks on Monday while addressing a press conference at Ganabhaban. The press conference was arranged to inform the media about the outcomes of her recent visit to the United States for joining the 76th session of the United Nations General Assembly in New York.
One journalist asked Sheikh Hasina whether the radical upheaval of Afghanistan would affect Bangladesh. The Prime Minister replied, "We are on high alert over this matter. We all will have to make sure that the adverse circumstances of Afghanistan do not impact Bangladesh as far as militancy and religious extremism are concerned."
Sheikh Hasina called upon journalists to place sufficient importance on thwarting militancy and religious bigotry in their reports, columns as well as in talk shows.
It may be added that The Asian Age published its lead report titled "Radical forces inspired by Taliban: Experts blame Chinese influence, debt trap diplomacy, terror finance" on Monday. In this report The Asian Age focused on the probable revival of radical Islamic quarters in Bangladesh in the wake of the return of Taliban to power in Afghanistan. This report referred to the fanatical wings that vandalized Bangabandhu Sheikh Mujibur Rahman's sculptures and carried out violent demonstrations in March 2021 against the visit of Indian Premier Narendra Modi to participate in Bangabandhu's birth centenary and Bangladesh's independence golden jubilee. The above-mentioned report also stated that the banking and financial sectors of Bangladesh should be streamlined and should be freed from corruption and irregularities. Defaulted loans and money laundering are rising incessantly while reports have surfaced that a big portion of the laundered money is being spent on terror finance, The Asian Age added.
While speaking on other issues,Sheikh Hasina said Bangladesh Nationalist Party (BNP) wants to make the next general election controversial knowing that there is no chance for them to win it.
"They know they don't have any possibility of winning the election. So, their effort is to make it controversial, create confusion among people and harm people by any means," Sheikh Hasina said replying to a question.
Some journalists attended the press conference at Ganabhaban, while others were connected from the Prime Minister's Office through a virtual platform.
Sheikh Hasina questioned the leadership of BNP saying that one (Khaleda) is convicted for misappropriating the fund of orphans and another (Tarique) is a fugitive convicted for various misdeeds, including the August-21 grenade attack and 10-truck arms-haul cases.
"They know they won't win. How will a party win? Where is its leadership? One is convicted for misappropriating the fund of orphans and another is a fugitive as he's convicted for the August-21 grenade attack and 10-truck arm-haul cases. They are still there in the (party) leadership. If this is the case, under which consideration people would vote for them," Sheikh Hasina questioned.
The Prime Minister said even these two top leaders will not be able to participate in the election.
BNP leaders have no confidence about winning the upcoming polls, Sheikh Hasina added.