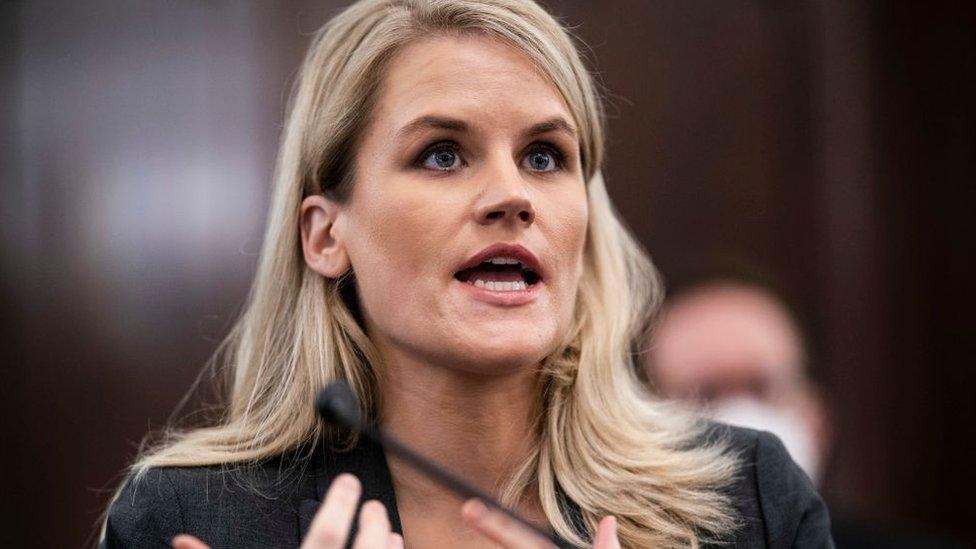 A former Facebook employee has told US lawmakers that the company's sites and apps "harm children, stoke division and weaken our democracy".
Frances Haugen, a 37-year-old former product manager turned whistleblower, heavily criticized the company at a hearing on Capitol Hill.
Facebook however said Ms Haugen spoke about areas she has no knowledge of.
It comes amid growing scrutiny of the social media giant and increasing calls for its regulation.
Facebook is the world's most popular social media site. The company says it has 2.7 billion monthly active users. Hundreds of millions of people also use the company's other products, including WhatsApp and Instagram.
But it has been criticized for everything from failing to protect users' privacy to not doing enough to halt the spread of disinformation.
Both Republican and Democratic senators on Tuesday were united in the need for change at the company - a rare topic of agreement between the two political parties.
In a statement issued after the hearing, Facebook said it did not agree with Ms Haugen's "characterization of the many issues she testified about". But it did agree that "it's time to begin to create standard rules for the internet."
"It's been 25 years since the rules for the internet have been updated, and instead of expecting the industry to make societal decisions that belong to legislators, it is time for Congress to act," the statement read.
Ms Haugen told CBS News on Sunday that she had shared a number of internal Facebook documents with the Wall Street Journal in recent weeks.
Using the documents, the WSJ reported that research carried out by Instagram showed the app could harm girls' mental health.
This was a theme Ms Haugen continued during her testimony on Tuesday. "The company's leadership knows how to make Facebook and Instagram safer, but won't make the necessary changes because they have put their astronomical profits before people," she said.
She criticized the company's founder and chief Mark Zuckerberg for having wide-ranging control, saying that there is "no one currently holding Mark accountable but himself."
And she praised the massive outage of Facebook services on Monday, which affected users around the world.
"Yesterday we saw Facebook taken off the internet," she said. "I don't know why it went down, but I know that for more than five hours, Facebook wasn't used to deepen divides, destabilize democracies and make young girls and women feel bad about their bodies."
The answer, she told senators, was congressional oversight. "We must act now," she said.
Facebook has denied her accusations and defended its safety record.
As she spoke, the company's policy communications director Andy Stone live tweeted a response to her testimony, saying she was being asked about areas she did not work on - including child safety and Instagram.
Lawmakers from both parties voiced criticism of Facebook during the hearing.
"The damage to self-interest and self-worth inflicted by Facebook today will haunt a generation," Democratic Senator Richard Blumenthal said.
"Big Tech now faces the Big Tobacco jaw-dropping moment of truth," he added, a reference to how tobacco firms hid the harmful effects of their products.
Fellow Republican Dan Sullivan said the world would look back and ask "What the hell were we thinking?" in light of the revelations about Facebook's impact on children.