RESPONSIBILITIES OF A WELFARE STATE

A Blind Equality in an Unequal Society is a Great Inequality 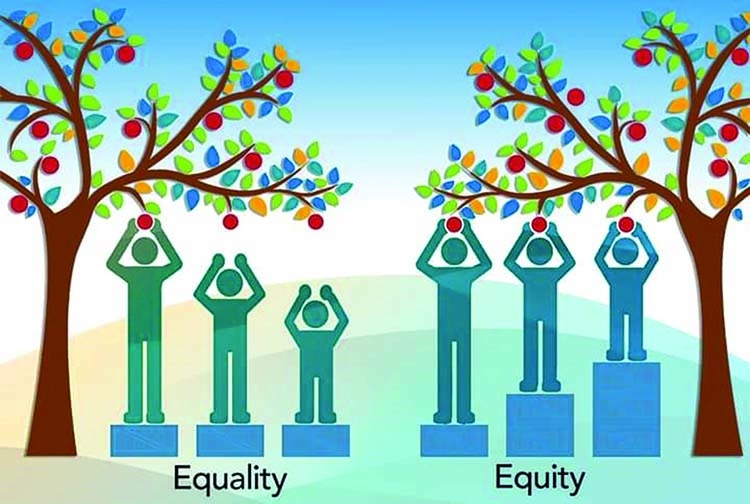 Musa Kalimullah
Equality is an inherent demand of every society's people. We generally think everyone should be treated under equal footage and under same manner without considering circumstances. Of course, undoubtedly it is a fundamental and legal principle of rule of law that everyone should be treated under the same footage, law must be applied equally to all-is a fundamental demand of legal morality, associated with the ideal of the rule of law. But many worries that this generality, the "formal" equality of law, props up substantive inequalities in a hierarchical world in which people have different capacities, endowments, and fundamental interests.
In this regard two quotes quite are relevant. "Is there not one law for both the lion and the ox?" --  Blake, Visions of the Daughters of Albion.  "One Law for the Lion & Ox is Oppression -Blake, The Marriage of Heaven and Hell.  So, it is quite questionable that whether the weather is reasonable and justifiable without ensuring the equal position of interest holders.
That means whether the persons stand under a reasonable equal position or not among whom we are intend to distribute the actual services. If we give an example, it will be clear that in case of famine, three families will be helped in a certain arena. The first family has three members, the second family has seven members and the third family has ten members.
The decision is taken to allocate 20 kg of rice for each family. Now if we consider the fact by considering legal ground or under the rule of law then no injustice has been taken place here because you have applied the law equally for all but if we consider it as equitable ground or under equity law a grave injustice has been taken place here because the backgrounds of these three families are not equal in position, they still are not under same footage who have interested in the fact. In the above example, first family members may be able to sell rice. But the last family members may not have eaten by the allocation.
So the main considerable matter is that we should consider the condition of those on whom the original law will be applied or those within whom the interest will be distributed. For applying the actual message of preamble of our constitution in order to realise a socialist society free from exploitation the state is not prohibited to the favour for the backward or legging behind and disadvantage Segment of the society.
Clause 4 of article 28 of the Constitution provides that nothing in this article shall prevent the state from making a special provision in favour of women and children or for the advancement of any backward section of citizens. Clause 3 of article 29 of the construction of Bangladesh also runs: nothing in this article shall prevent the state form-a) making a special permission in favour of any backward section of citizens for the purpose of securing their adequate representation in the service of the Republic;
b) giving effect to any law which makes provision for reserving appointments relating to any religious or denominational institutions to persons of that religion or denomination;c) reserving for members of one sex any class of employment or office on the ground that it is considered by its nature to be unsuited to members of the opposite sex.
So, the constitution seems to approve a shot of inequality in the manner of reasonable classification.The issues of special provisions for backward section of people in the constitution of Bangladesh has been presented in a very narrow sense. Moreover, the issues that are mentioned in our constitution are restrictive sensors in many cases.
The reality remains very different in the form of theory mentioned in construction. Considering the reality, it can be seen that if I mention here the actual situation of my own batch in department there don't have any single person who belong to small ethnic groups, a disabled person and a third gender but they should have been there in proportionately considering the total population of Bangladesh. Though they represent in many places but it is largely inadequate.
In most public and private institutions, on the roads and in vehicles, there is no separate treatment system for those with physically, mentally and visually disabled in category, through which they can deal with everything without the help of others.  Moreover, if we consider the issue of emergency lanes in our country, it also covers this issue too a large extent.
Lack of emergency lanes has led to many fatal accidents in various cases. So, if we want to see Bangladesh as a happy and prosperous country in the future, we have to focus on economic growth, upstream GDP and building big infrastructure as well as turning the backward section of citizens into wealth.

Musa Kalimullah is a Student of Law, Jagannath University, Dhaka.